THE REPUBLIC OF THIEVES pushed back to 2012

Okay, it was clear a few weeks ago that The Republic of Thieves was not going to be a 2011 release, but Gollancz have confirmed it by giving the book a new date of March 2012 in their online catalogue. Frustratingly (for Scott Lynch and Gollancz as much as the fans), this date is still not final or set in stone. 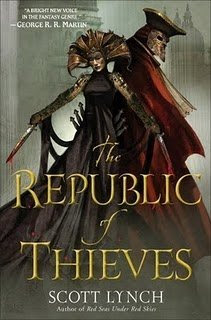 According to Gollancz the date is:

Scott has been blogging more frequently recently and assures us that:

"For the curious: The instant, the microsecond I have an unchanging date for TRoT's release I will Twitter the holy bejeezus out of it."

Shame for what? The book has been delayed because Scott hasn't handed in the final rewrites and the final draft of the book.

I am just about finished re-reading Lies and fell in love with this series all over again.

The Anonymous Shawn Speakman: I think what the other poster means is that Gollancz shouldn't announce another date that has no factual evidence of being correct. :)

I'll put on my surprised face. Yeah, I am not expecting it anytime soon.

This is the first time I'm slightly disappointed with Gollancz, since they released an audio interview with Scott where he himself stated it was coming out in November 2011.

The guy is dealing with some extremely difficult things, so you can't fault the delay in release, but it's still kind of frustrating...

Ah well, the more important thing is that Scott finds his happiness and joy for writing again and that the book is only released when it's as good as it can be.

I suppose this doesn't bode well for the prequel Gentlemen Bastard book either?

It'll be done when it's done. Plenty of other fantastic books to be read while we wait.

Hopefully, you and me both.

Apparently it will now be autumn 2012 at the earliest.