Dreams of Steel by Glen Cook

The Black Company and its Taglian allies have fought a great battle against the Shadowmasters at Dejagore. Whilst much of the Shadowmaster army was destroyed, the allies also suffered grievous losses and most of their army was forced to retreat into the city, where it now stands siege. Trapped outside and with Croaker missing, Lady is forced to assume command of the routed Taglian forces, attempt to regroup them and forge a new army strong enough to relieve Dejagore, but finds that politics and religious machinations amongst her own troops are as much a threat as the plotting of the enemy. 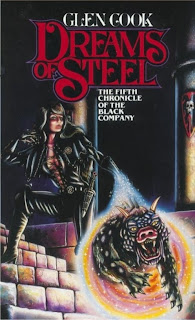 Dreams of Steel marks a notable change in the Black Company books. For the first time, Croaker is dropped as the primary POV in favour of Lady, who now serves as the main POV character, narrator and 'annalist', recording events for posterity. This shift in structure and approach is successful, with Cook employing a character who is far less prone to moralising than Croaker (it serves to remember that Lady was, more or less, the main bad guy in the original trilogy, and has only repented up to a point) and is still fully capable of using incredibly ruthless and bloody means to achieve her goals.

The book adopts a multi-pronged approach to the plot, with Cook alternating between Lady's endeavours, the situation with the Shadowmasters (who are, refreshingly, a foe of limited resources who themselves are in a bady way following the events of the previous novel), political events in the Taglian capital and the emergence of a third faction who delights in playing everyone off against each other whilst they sneak around in the background. This approach is successful in getting across the full weight of the story but also serves to slow the pace down. Compared to the first four books, which covered thousands of miles, numerous battles and some interesting character and plot developments in relatively modest page counts, not a huge amount actually happens in this book. For the first time, it feels that Cook is falling prey to the curse of the long epic fantasy series, namely the slowing of the pace and the easing off the throttle for more introspective books that may be interesting, but not as energetic as earlier books in the series.

Cook is enough of a good writer to overcome this problem with some solid battle scenes, an amusingly straightforward answer to politicking and some interesting characterisation, particularly of Lady as she realises how she has been changed by her time with the Black Company. However, returning readers may start to feel a little wearied when, once again, an old enemy assumed dead books ago unexpectedly returns to play a role in events.

Dreams of Steel (***½) is an enjoyable novel, but the shine of the Black Company series is starting to wear off at this point, with the first signs of it falling prey to some of the limitations of the subgenre. The novel is available now in the UK and USA as part of the Books of the South omnibus.
Posted by Adam Whitehead at 17:00

These middle books are a bit slower, but the last two in the series, Water Sleeps and Soldiers Live, may be the best in the entire series.

I can't agree with the lower score for this volume. It's one of my favorites in the series for the way it lets the reader into Lady's head. She simply tells a story in a different way than Croaker did, which I find refreshing. And I like her almost casual brutality, such as how to solve the problem of the pesky priests.