The Wire: Truth Be Told by Rafael Alvarez

Ah, the humble episode guide. Once a solid mainstay of bookshop TV sections all over the world, now hunted to the brink of extinction by the internet. Publishers have had to rethink how their handle TV tie-in books now. A recap of each episode and a cast list doesn't cut it any more, and these books now require more interesting and original content if they are to be successful. 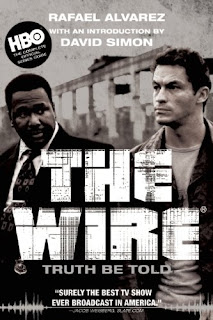 Truth Be Told attempts to be a guide to The Wire that falls into the latter bracket and is somewhat successful. The book rises above the episode guide norm by being written by an actual writer from the TV series (he wrote three episodes for the show) and featuring interviews with the production staff behind the show, as well as some of the actors. There are essays about elements of the show ranging from its realism, its reception by Maryland politicians and a feminist analysis of the series. The Wire's creator and showrunner, David Simon, provides an introduction and there is a long interview between him and author Nick Hornby about the inspiration behind the series.

The standard episode guide format can still be found in this book, with brief (and, it has to be said, rather un-detailed, missing elements such as the blink-and-you-miss-it outing of Rawls in Season 3) recaps of each episode and cast and crew listings. Frustratingly, there isn't a 'behind-the-scenes' section for each individual episode, meaning that as a guide to a TV series it falls way behind the quality of Terry J. Erdmann's Deep Space Nine Companion (still the gold standard for TV companion books).

Much more interesting are the overviews for each seasons, when Simon and other writers and producers give their thoughts on what they were trying to achieve each year, the side-essays and a number of character profiles. These range from the predictable to the insightful, and the feminism essay needs a special mention for the way the writer tries to square the show's limited use of female characters (which could be regarded as problematic) against the real sexism inherent in the institutions the show is depicting (i.e. can you depict real institutions which notably underrepresent women without becoming part of the same problem?).

Ultimately, Truth Be Told (***½) is more than the standard TV episode guide fluff, but ultimately it feels like it has the right idea but doesn't go far enough. Profiles for all of the major characters rather than a handful would have been a start, perhaps with more attention to detail and more in-depth coverage of each individual episode. As it stands, it's a solid companion piece to the TV series, but not an essential one. The book is available now in the UK and USA.
Posted by Adam Whitehead at 16:40