England, 1215. Facing rebellion and insurrection, King John signs a formal document outlining the limits of his royal power, the Magna Carta. Within months he has repudiated the document and brought in an army of Danish mercenaries to isolate and destroy the nobles who forced him to sign it, one-by-one. Thomas Marshall, a Knight Templar, and Baron d'Aubigny vow to oppose the invasion and take control of Rochester Castle, the gateway out of southern England. John must take the castle or risk his lines of supply being cut off behind him. So begins a furious siege, with twenty defenders holding out against an attacking army of a thousand with little hope of relief. 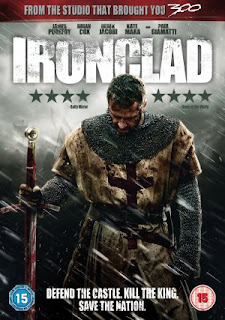 Ironclad is a medieval war film, depicting King John's Siege of Rochester in 1215 during the First Barons' War. This siege was notable as John personally commanded the siege and prosecuted the siege with unusual vigour. Unable to simply wait the garrison out, he undertook to take the castle by storm. He employed a full battery of medieval tactics to take the castle, including scaling ladders, siege engines, mines and even burning pigs (used to help breach the keep from underneath). It was a brutal, ugly siege which Ironclad depicts reasonably convincingly.

The film stars the ever-reliable James Purefoy (notable for his stunning turn as the verbose and debauched Mark Antony from the HBO series Rome), cast against type as the quiet, intense and conflicted Marshall, very loosely based on a real historical figure of the same name. Marshall is a Knight Templar who no longer feels he is worthy to be a member of the order, and is tortured by his feelings for women and his inability to keep his vow of silence. He pretty much spends the whole film exchanging scenes of angst with scenes of slaughtering hordes of attacking conscripts (and occasional Danish mercenaries). This structure risks cheese - and a distinct aroma of Stilton starts to rise during the painfully cliched will they-won't they romantic scenes with the lord's sexually-frustrated wife, Lady Isabel (played with enthusiasm but little subtlety by Kate Mara) - but Purefoy's notable screen presence just about manages to keep things ticking along.

The rest of the cast is surprisingly distinguished. Brian Cox is in his element as the old warhorse assembling a team of scoundrels and criminals to defend the castle, whilst Derek Jacobi plays the lord of Rochester Castle who is upset by his peaceful fortress being turned into a warzone. Charles Dance has a sterling turn as Archbishop Langdon, whilst Jason Flemyng gives a solid performance as Becket, the most dubious of the castle defenders. Outshining everyone else, however, is Paul Giamatti who gives a passionate performance as King John. The utter rage John feels at having been forced to limit the powers of the throne (the beginning of a movement which will ultimately lead to the English Civil War, four and a half centuries later) is palpable, and his increasing desperation to burn all trace of Magna Carta to ashes before he is militarily defeated is well-played.

From a production standpoint, the film has to face the challenge of depicting a fairly brutal and savage siege on a relatively limited budget. Director Jonathan English makes the most of his resources, however, creating a superb set for the siege itself. It can be seen where costs were cut during the battle sequences (most notably the use of slightly fake-looking CGI for the flaming siege weapons), but overall the film manages to sell the illusion it is trying to create.

From the viewpoint of historical accuracy, the film takes a fair number of liberties. The number of defenders of the castle was much higher in reality (between 100 and 150) and, although John did succeed in reducing the castle to a ruin, he ultimately failed to take the castle by assault and had to starve the last defenders out. He also didn't massacre the surviving garrison, having been persuaded that to do so would risk reprisals if he was captured in the battles to come. Most notably, the film depicts the defenders holding out hopes for an imminent French intervention, where in reality the French did not dispatch troops until many months later. Arguably the real events could have been used to tell a more interesting and dramatic cinematic story, but the budget and time restrictions of the movie did not allow this.

Ironclad (***) is therefore a movie which has a lot of problems. The romance is shoehorned unconvincingly into the narrative and Kate Mara's character is given little to do outside of it. The film also takes more liberties with historical accuracy than some may feel comfortable with. Against that most of the performances are extremely strong (Giamatti in particular) and the battle sequences are well-staged. Ultimately it entertains, if you can overcome the urge to wince at its failings. The movie is available now in the UK (DVD, Blu-Ray) and USA (DVD, Blu-Ray).
Posted by Adam Whitehead at 20:54

Email ThisBlogThis!Share to TwitterShare to FacebookShare to Pinterest
Labels: ironclad

Good review,you summed up my feelings on this film far better than I could :) Any plans to review Purefoy in Solomon Kane?

I think I got maybe 10 minutes in and gave up, might try it again one day but not likely.

"The film also takes more liberties with historical accuracy than some may feel comfortable with."

That's a rather nice way to put it. What about the blue-painted pagan Danes? (the Danes never painted themselves in battle, in 1215 they had been Christian for centuries, and John never hired Danes anyway). Never mind the silly stuff like living pigs being set on fire then sent into the mine...

For me, this movie is easily one of the greatest disappointments in the last months. "A few liberties" does not even start to get it. The characters are extremely one-dimensional and corny on the "good" side, especially Marshall and the chick in the castle, and absolutely anachronistic in what they say and do. I hate that in medieval movies, so I am biased :)