Every fifty thousand years a race of sentient alien starships, the Reapers, scour the Milky Way of organic life for unknown reasons. The time of their return is at hand and the races of the Galaxy are not ready. It took the combined firepower of several entire fleets to destroy the first Reaper scout, Sovereign. In the process the Citadel - seat of the Galactic Council - was so badly damaged that repairs will take five years to complete. 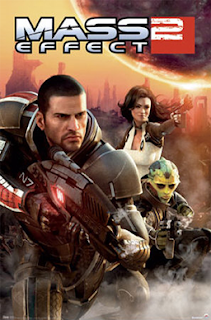 The Council believes the threat is over, and discounts reports that an entire fleet of hundreds of Reaper ships is lurking beyond the Galactic Rim. Their scepticism grows when Commander Shepard, the only human to know the true extent of the threat, is apparently KIA. But, two years later, Shepard resurfaces, now working for the Cerberus organisation outside the authority of Earth or the Council. Shepard now has the resources to carry the fight to the Reapers and starts by attacking one of their servant species, the Collectors, who have been raiding human colonies in the lawless Terminus Systems. But Shepard's allegiance with a borderline terrorist organisation threatens to alienate his former allies and undermines his attempts to expose the scale of the Reaper threat.

Mass Effect 2, released in 2010, is the middle volume of a computer roleplaying trilogy. Unlike a lot of such series, which are normally developed ad hoc based on the sales of the previous game, the Mass Effect series was always envisaged as a trilogy with events building from one game to the next and culminating in an epic finale (to be seen in Mass Effect 3, released next month) which pits the entire Galaxy against the invading Reapers on a massive scale. Mass Effect 2 is therefore something of a bridging game, with a surprisingly small scope compared to the events of the first or third games (these things are relative, however, as ME2 still features ferocious firefights in alien starships dozens of miles long).

The game's structure sees Shepard working for Cerberus and its shadowy founder, the Illusive Man (voiced with gravitas by Martin Sheen), an alliance of former foes (Cerberus is a side-enemy in the original Mass Effect) against the dual threat of the Collectors and the Reapers. The bulk of the game is set on the new starship Normandy SR-2, with Shepard choosing what assignment to undertake next. Early assignments revolve around building up a team of allies to help in the battle. The cast of the original Mass Effect has been scattered across the Galaxy and most are unavailable to help out in the new fight (though two of them do sign up and the rest show up in cameos), so Shepard is mostly reduced to forming a new team of dubious reliability and melding them into a cohesive unit. This is done by undertaking 'loyalty missions' for each character. Whilst optional, winning each character's loyalty pays dividends for the final mission - where unreliable or disloyal characters might die, or cause others' deaths - and hugely extends the playing time of the game (doing all of these missions results in Mass Effect 2 clocking in at about 25 hours, or twice the length of the original).

This structure relies on the characters being compelling. Fortunately, Mass Effect 2 is the work of BioWare, who have created some of the most memorable characters in RPG history (and one of their most famous, Minsc from Baldur's Gate, gets a couple of hilarious shout-outs in ME2). There is a sense of early disgruntlement that most of the characters you got to know over the dozen or so hours of the original Mass Effect have been jettisoned, but this is soon overtaken by an interest in the new cast. BioWare have gone to some lengths to give each character their own motivation, personality and goals, backed up by strong voice acting and some excellent writing. There's some geek-friendly casting, with the likes of Yvonne Strahovski (Chuck), Michael Hogan (Battlestar Galactica), Robin Sachs (Babylon 5/Buffy the Vampire Slayer), Keith Szarabjka (Angel) and Tricia Helfer (Battlestar Galactica) providing voices, but all do great work. Keythe Farley deserves a special mention for his exceptional voicing of Thane Krios, the spiritual assassin dying of a terminal wasting disease.

Gameplay-wise, Mass Effect 2 is an evolution - critics might call it a devolution - of the mechanics in the original game. Just as the original game downplayed some traditional RPG elements (such as inventory management) in favour of shooting, Mass Effect 2 takes this even further. Character advancement through levelling is streamlined considerably, with the removal of the original game's extensive skill tree in favour of a smaller, more combat-focused levelling mechanic, whilst the inventory has simply been removed completely. Inventory-less RPGs have been made before (such as the splendid Freedom Force superhero games) but it's still disconcerting to see in action. However, more careful examination of the game reveals that many of the same tangible effects of the inventory management of the first game (upgrades to weapons, grenades, armour and abilities) still exist, but have been transferred to the new research/upgrade system.

This system employs a research lab which has been installed on the Normandy. Once Shepard has recruited a scientist, he can start researching upgrades to existing weaponry, armour and abilities, or unlock new weapons altogether. He can also upgrade the Normandy's capabilities. Again, this seems optional but it plays a major role in the game's finale (extending to some characters dying if the ship hasn't reached its maximum potential). Researching doesn't come for free and resources must be gathered from planets to fund it. This leads to a side mini-game where the Normandy orbits planets and scans them for resources, launching mining probes to recover them. This system can be slightly annoying (spending significant amounts of time mining when there's Collectors to be killed can be frustrating) but it's a much more intelligent use of resources than the original game (where they existed solely as an optional mission objective to make you look good).

To the meat of the game, which is the in-mission view. There are two types of mission, 'hub' missions set on planets or space stations mostly inhabited by friendlies where Shepard has to resolve issues, typically through roleplaying. The game's intelligent dialogue system (slightly refined from the original game, with the addition of Paragon/Renegade actions you can undertake in addition to the simple speaking of dialogue) comes into its own here, with Shepard using diplomacy, threats or a mixture of the two to get a favourable outcome. However, far more commonplace are combat missions where Shepard and two allies have to fight their way through various enemies to achieve a mission objective.

Combat is similar to the first game, in that it emphasis cover and directly shooting enemies rather than any kind of turn-based or pause-based combat, though you can still pause the game and bring up a tactical command menu, giving orders to your troops or employing special abilities yourself. It's been refined, with a more intelligent cover system (less sticking to a wall you just happen to brush up against) and the addition of area-based damage, such as headshots. Those looking for a more RPG style of combat may be disappointed by the directness of the battles, but at the same time those used to pure shooters like the Gears of War series may find the addition of dialogue options and a great degree of player freedom and choice to be liberating. BioWare are conflating the two genres here and doing so well, but RPG fans may feel that the game is a little imbalanced towards the shooter genre. Those who like both genres (like myself) will feel more at home with the game.

Overall, Mass Effect 2 is a very strong game which emphasises player choice in the fields of characterisation and story development. What you, as Shepard, say or do in the game has enormous consequences, potentially leading to most of your crew being wiped out. Decisions also have important ramifications in Mass Effect 3, which may give players pause (for example, deciding the fate of a cure to the krogan plague or whether to pit the geth and Quarians into full-scale war has little impact in Mass Effect 2 itself, but will be major plot points in the final game). Complaints that the game is a dumbed-down RPG due to a streamlining of the gameplay systems are understandable, but the game also makes great strides forward in characterisation and the impact of player choice on personal interrelationships. This is a fascinating development in the way games handle characters and how relationships between them work, and shows how games can handle these factors in a way that films and novels cannot, an important evolution in the medium.

Of course, those less interested in the title's place in gaming history can ignore all of that and get on with saving the Galaxy by laying waste to everything in sight with overwhelming firepower.

Mass Effect 2 (****½) is a very good game, with some excellent writing, memorable characters and strong combat sequences. The reducing of RPG elements in favour of shooter ones may offend RPG purists, but overall BioWare handle the merging of the two genres successfully. The game is available now in the UK (PC, X-Box 360, PlayStation 3) and USA (PC, X-Box 360, PlayStation 3). Mass Effect 3 is released on 6 March 2012 in the USA and three days later in the rest of the world.
Posted by Adam Whitehead at 16:02

I was a huge fan of the first Mass Effect and fully expected to become a fan of Mass Effect2. I was, until the disc went haywire. After playing the game four times, when I went load it again for another go, while it loaded OK, when it came to the opening sequence, I got picture only, no sound, then it simply refused to begin the game proper. Very disappointing. I can't think that my disc was the only one here in the UK with a use by date. I'd be interested to know if there were any others.

This game is one of the greatest games of all-time. I cant state enough how much I love these games. ME2 greatly improved on all of ME1's weaknesses and while dumbing down the RPG elements a bit, they kept the fast paced gameplay and amazing settings

Was given this game during San Diego Comicon as a prize. Played it and got hooked. Very excited for the 3rd one!

I feel the characters, despite their checklist of sidequests and issues, are simply clichés, cartoons, stereotypical embodiments of their class or disposition, covergirls or indefinable blank spaces for anyone's projections (Kaidan and Jacob the latter). They're quite generic attempts at what Bioware thinks would make for cinematic dialogue.

I think this is an excellent game. While I disliked some of the changes made from ME1, on the whole I found the story strong, most of the characters interesting and the final mission an absolutely incredible sci-fi-movie-action-sequence-made-into-a-game.

Brilliant, and I can't wait to take my version of Shepard into the sequel.