The Ladies of Grace Adieu by Susanna Clarke

Susanna Clarke's much-acclaimed 2004 novel Jonathan Strange and Mr. Norrell explored a world in which real English history and fairy folklore are deeply entwined, where magicians aided in the war against Napoleon and fairy lords intervened in mortal affairs to no good end. Since Clarke took ten years to write the novel, a sequel or follow-up was probably not going to appear soon, so author and publishers chose to release a collection of short stories as a stop-gap in 2006. 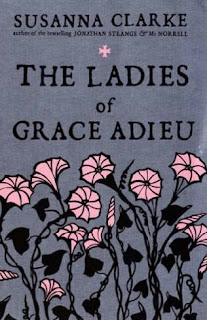 The Ladies of Grace Adieu and Other Stories collects together eight short stories, all of them previously available (apart from the last one) and most of them set in the same alternate reality as Jonathan Strange and Mr. Norrell (though one, 'The Duke of Wellington Misplaces His Horse', actually takes place in the setting of Neil Gaiman's novel Stardust). For the most part the writing style is similar to that of the more celebrated novel, a mixture of whimsy and more serious themes played out with a writing style reminiscent of Victorian literature at its most elaborate although, thankfully, not its most verbose.

The opening and titular story is about three women in a Gloucestershire village who meet Jonathan Strange. It was Clarke's first published story (appearing eight years before the novel) and is impressive in its confidence. In the novel, female characters were on the sidelines, but here take centre stage, to Strange's amusing befuddlement. There's some subtle characterisation and some interesting inversions of both 19th Century novels and fantasy books in general (particularly their treatment of women) and it's all extremely readable. 'On Lickerish Hill' entertains but is less successful, being a rather straightforward rewrite of a classic children's character for no real gain. 'Mrs. Mabb' returns to the theme of the role of women in Victorian literature, playing around with the stereotypical depiction of abused or suffering women as hysterical wretches, and is one of the more successful stories in the collection.

'The Duke of Wellington Misplaces His Horse' is fairly predictable, and its use of the Wall setting from Stardust feels unnecessary. 'Mr. Simonelli' is probably the highlight of the collection, featuring the titular character falling afoul of a fairy relative and having to save the five Gathercole sisters from the fairy's dubious carnal interests. The way the protagonists spar over high stakes whilst maintaining a polite and pleasant level of discourse recalls Jack Vance at his most creative. 'Tom Brightwind' is also amusing, featuring as it does a fairy/human double-act about whom more adventures could be told. 'Antickes and Frets' features Mary, Queen of Scots attempting to utilise magic to bring down her rival Elizabeth I from inside prison, to mixed results, and is one of the slighter stories in the book. Things conclude with 'John Uskglass', in which the titular, ultra-powerful character is brought low by a peasant (albeit one backed up by the firepower of some annoyed saints), which again amuses but little more.

As a collection, The Ladies of Grace Adieu manages the tricky feat of retaining a common prose style (which it also shares with the novel) whilst injecting a variety of tone. Some of the stories are darker and more grim than others, whilst some are comedic or satirical. Clarke proves adept at using these different tones and creating interesting characters (none moreso than the Brightwind/Montefiore duo) and situations. A particular success here is pacing. Whilst Jonathan Strange was a five-star, 600-page masterpiece undone by being 950 pages long and featuring a long, agonisingly drawn-out ending that sapped the book of much of its narrative vigour, this collection is understated and concise, knowing when to end the story and move on. Whilst the stories cannot hope to match the epic scope and depth of the novel, they also reject some of its more obvious flaws, and show that Clarke is a skilled and interesting author (and, hopefully, one who is not too many more years away from unveiling her next full novel).

The Ladies of Grace Adieu and Other Stories (****) is a fine companion-piece to Jonathan Strange and Mr. Norrell, though it does not drift too far away from its setting or tone. It is available now in the UK and USA.
Posted by Adam Whitehead at 16:32

Email ThisBlogThis!Share to TwitterShare to FacebookShare to Pinterest
Labels: susanna clarke, the ladies of grace adieu

Good book, read this soon after the Jonathan Strange one. Looking forward to her next work.