HBO on the Battle of the Blackwater (and Dunk 'n' Egg)

An interesting comment by Game of Thrones co-producer Vince Gerardis: the Battle of the Blackwater will last 16 minutes of the penultimate episode of Season 2. 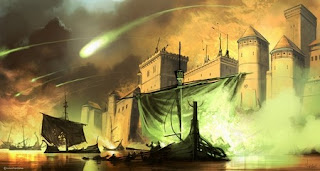 This is an interesting figure. The Battle of Philippi, the largest previous attempt by HBO to depict a massive battle sequence on a regular series (on Rome), lasted for nine and a half minutes. The opening D-Day sequence in Saving Private Ryan lasted about fifteen minutes. The opening battle in Gladiator lasted just under ten minutes. The battle for control of Babylon 5 in the Severed Dreams episode of that series lasted six minutes.

Sixteen minutes - more than a quarter of the episode - is an impressive amount. I wouldn't be expecting anything on the lines of a major movie action sequence, but it'll be interesting to see if HBO are opening the purse strings a little more this season (not they didn't have a big budget last year, but they certainly weren't getting the most bang for their buck).

The episode in question - Blackwater - is written by George R.R. Martin and directed by Neil Marshall (The Descent, Centurion) and should air (barring delays) on 27 May in the USA and 28 May in the UK.

In the same interview, Gerardis also says that HBO are holding the three (soon to be four) Dunk 'n' Egg prequel novellas in reserve for another two years or so. This suggests that HBO have a gameplan for using the novellas to flesh out their Game of Thrones content. Pure speculation, but it's possible they are thinking of using them as a spin-off series (Dunk and Egg wandering the Seven Kingdoms is actually a solid premise for an ongoing TV series), for between-season straight-to-DVD movies, or as stopgaps if they have to delay the main series for whatever reason (akin to what Starz did with the Spartacus: Gods of the Arena mini-series when the main series had to be delayed for a year).

Amendment: According to Westeros.org, Gerardis's comments were mistranslated (the interview was originally in Portuguese). Gerardis stated that the battle took up a sizable portion of the episode and is 'fantastic' but is still being produced with TV budgetary and time constraints and wishes they could have done more. He also stated that the prequel novellas are being looked at and hopefully in a couple of years HBO will be able to do something with them, but for the moment are concentrating on the main series.
Posted by Adam Whitehead at 14:13

I'm wondering if they keep the Dunk & Egg novellas as a possible buffer until "A Dream of Spring"/"A Time for Wolves" (I still hope that he will revert to the old title...) is released. Because there is NO way that Martin will finish the last novel (if it even will be the last novel) in time for the television production. He will take about four years to finish "The Winds of Winter" and another four years for the final book - and this is optimistic.
The television series might turn "A Storm of Swords" into two seasons and the content of "A Feast for Crows" and "A Dance with Dragons" into another two. By then, Martin's penultimate novel will have been released. But even if it provides enough ccontent for another two seasons, they will have to wait for "A Dance with Dragons".
The biggest problem here - the elephant that nobody speaks of - is, of course, that we are already talking about six seasons until the End of "Dance". Even if the series proves to be successful enough to last that long, many lead actors will probably not be willing to spend that much of their professional career with one HBO production...

As long as they do it all with high quality then I am all for all of it and more. Bring it on!

GAME OF THRONES takes about 5 months to film, which leaves the rest of the year free for the actors to work on other projects (Kit Harington filmed a movie between Seasons 1 and 2, Richard Madden appeared in a UK drama series etc). It's still a big commitment, but it's not the 8-9-month filming schedule of a regular, 20+ episode US TV series.

As for how they manage this, it's going to be difficult. If ASoS, AFFC/ADWD, TWoW and ADoS are all two seasons each that will last us until 2020, which means 10 seasons. That seems highly improbable. If TWoW and ADoS are 1 season each, that's going to cause problems for HBO overtaking GRRM. If the book series goes to 8 volumes, HBO will definitely overtake GRRM as well.

As a result, I think we have to accept (and if GRRM proves us wrong, awesome) that HBO will finish their story before George finishes his. Hopefully if this is the case, GRRM will write the final episode and will contribute more detailed outlines and ideas for the TV show once it passes the books.

Are you saying the show would tell us the ending before we get it in the books?

Dunk and Egg would make good TV, and it would give HBO a way of keeping the series in people's minds if there is a delay with filming a season.

Would the show tell us the ending before we get it in the books if the TV show overtakes the books? Absolutely. HBO are not going to put the show on hold for years on end whilst they wait for the books. GRRM has given HBO and the producers an outline of the remainder of the series towards this end, in fact.

However, I think it's also likely that the show will diverge away from the books as more time passes. Whilst the ending would likely be broadly the same as the one we'd get in the books, there would be many differences (taking into account book storylines and characters that simply do not exist in the TV show).

I'm not sure how I feel about having HBO finish the series before GRRM finishes the books. Seems rather strange.

"I'm not sure how I feel about having HBO finish the series before GRRM finishes the books. Seems rather strange."

I feel the same way, but I’m not convinced GRRM will ever finish the series. He seems burned out as a writer, and the last two books feel like he doesn’t really know where he wants to go, 2000 pages of mostly wheel spinning. I’m starting to think the show might be our only chance to get an ending to the series.

"the last two books feel like he doesn’t really know where he wants to go, 2000 pages of mostly wheel spinning."

I doubt George sold the rights to the A Song of Ice and Fire universe whole hog so this idea that they will just start pumping out their own ending to the series is just ridiculous. Don't interpret modest changes as the right to do whatever they want.

That means that HBO are free to do whatever they see fit with the story in the transition to the screen. If they decided to kill Tyrion in Episode 3 of Season 3 and have the Faceless Men turn out to be shapeshifting robots, they are free to do that and depict that on screen. GRRM has no creative control over the TV series. As part of the deal, HBO have to offer him the chance to write one episode per season and that's it. He's already said that there's been changes that he objected to (Mago's death in Season 1 most notably) and he was overruled by HBO who proceeded without his approval.

At the same time, of course, HBO have no control, input or influence over the remaining novels. If HBO make up their own ending to the story (based on GRRM's input or not), GRRM is not bound to follow that ending when he reaches the end of the novel series.

The TV series and the books are separate entities, HBO have total control over one and GRRM has total control over the other. That's pretty much always been the case with screen adaptations of novels or existing properties. The sole exception I know of is HARRY POTTER, where the desperation of the movie studios to make the films led to them signing an unprecedented deal with JK Rowling giving her director, scripwriter and script approval. GRRM does not have such a generous deal with HBO.