New Crobuzon is in the grip of economic disaster. A ruinous naval war against the city of Tesh is being prosecuted over thousands of miles, draining the city's coffers. People are laid off only to be rehired on a fraction of their original income to make weapons for the war effort. The seeds of revolution are being sown within the city. Outside, a band of revolutionaries are on another type of quest, to head into the badlands at the centre of the Rohagi continent in search of the perpetual train, the Iron Council. The Council defected from New Crobuzon's control twenty years ago and is now a symbol and a myth to the people, a sign of freedom and hope. But the rulers of New Crobuzon never forgets any slight against it, no matter how small, and have their own plans to take vengeance against the Council... 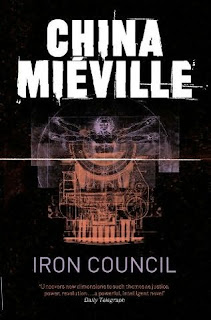 Iron Council, published in 2004, is China Mieville's fourth novel and the third set in his signature fantasy world of Bas-Lag, though it has little to do with the two previous novels (the solid Perdido Street Station and the excellent The Scar) and can be enjoyed by itself. It's a somewhat complex novel, following three distinct story strands. In the first, a band of revolutionaries from New Crobuzon set out in search of Judah Law, a man who knows the location of the Iron Council. Once reunited with him, they search together for the Council and how to best guide it home. In the second strand, Law flashes back twenty years to the events leading to the Council's defection from New Crobuzon's control. In the third, the story follows a revolutionary named Ori as dissent and anger on New Crobuzon's streets reaches fevre pitch and threatens civil war.

The book combines some influences from real history. Events in New Crobuzon are reminiscent of events in Petrograd (aka St. Petersburg) in the run-up to the Russian Revolution, with a ruinous war being prosecuted beyond the state's ability to fund it and this leading to economic disaster, fuelling social unrest. The storyline in the western badlands is more like a Western, with its iron roads spanning thousands of miles of hostile wilderness and hard-edged men and women fighting for survival with guns. Of course, this is Mieville, so the hostile natives are worm-like inchmen and stilt-like striders (who can be reasoned with) rather than simple tribesmen, and the terrain includes things like the cacotopic stain, an area where reality is bent out of shape and can recreate and change anything that passes through it. As with most of Mieville's output, his imagination is on formidable and impressive display. 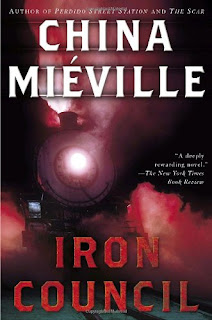 The novel focuses on the characters of Cutter, Judah Law and Ori, and Mieville does good work bringing these and a galaxy of supporting roles to life. Ori is a man searching for a role in life and is drawn into the world of politics and activism. Cutter is politically ambivalent and is driven in the hunt for the Council mainly by his love for Judah (which is ambiguously reciprocated). Judah is a more complex character, whose wants and ambitions see him yo-yoing between the Council and the city. He has impressive magical powers, most notably the ability to create golems. Mieville gives these golems a New Weird twist by allowing Judah to create them out of almost anything, including railroad sleepers and even shadows. What seems like a minor side-detail ultimately becomes a major part of the book's resolution. Mieville also infuses the minor characters like Spiral Jack and Ann Hari, with internal life and complex motivations, resulting in one of his better-cast novels (actually probably only second to his masterpiece, The Scar).

Iron Council seems to be regarded as one of Mieville's weakest novels, which is curious as I found it far better-written and more cohesive than Kraken, and certainly much more strongly plotted and characterised than even the revered Perdido Street Station. Criticisms seem to stem from it being too political, which I did not find to be the case. Despite being a socialist in his own politics, Mieville never gets preachy in the book. In fact, characters from numerous and diverse backgrounds are brought together in a situation where they feel forced to respond to the government's acts with disobedience and eventually violence, regardless of former party affiliations. Indeed, an attempt to politicise the revolution, to give it shape and an ideology, falls apart because the disparate factions that make it up are so different (that in itself - stand united or fall alone - may be a political statement, but if so one I don't think many can disagree with).

Where problems do emerge is in the book's tripartite structure. Swapping between events in the city and the badlands is fine, but the addition of a massive flashback sequence in the middle of the novel is a bit unwieldy. This self-contained sequence feels like it would have worked better at the front of the book as its own narrative rather than putting everything else on hold whilst the flashback unfolds mid-novel.

But other than that, Iron Council (****½) is a successful, imaginative and gripping fantasy novel, richly-characterised and fuelled by one of the strongest imaginations working in the field today. The novel is available now in the UK and USA.
Posted by Adam Whitehead at 11:41

Thanks for reviewing one of Mieville's earlier novels. With so much attention being paid to Embassytown and Kraken, many readers new to his work aren't even aware of Iron Council, The Scar, King Rat, and books of that time period.

I agree that The Scar is his masterpiece, and for me, Iron Council and Embassytown are equal seconds.

Great review Wert. This is one of three Mieville books I've yet to read, but it looks like I need to remedy that soon.

Excellent review. I've always thought that this book is extremely underrated, and it's a shame more Mieville fans don't try it. I definitely prefer it to Kraken and Perdido, and it's about tied with The City and the City for me. Need to do a re-read. The one part of your review I disagree with is concerning the flashback sequence- it's my favourite part of the novel, and just beautifully written. Love that image of the perpetual train...

I didn't enjoy the book very much the first time through (in 2004), then gave it another shot in, I think it was 2009, and absolutely loved it.

The main reason for not liking it the first time around was that flashback sequence. It is rather oddly placed. You just start getting into the plot then wham, the book asks you to forget about that stuff for 150 pages and read a densely written flashback with no quotation marks for the dialogue.

The second time I read it, I knew it was coming, and gave those 150 pages all my attention, unravelling the beautiful and bizarre imagery he packs so tightly into the prose. I came to realise that the flashback really is the best part of the novel.

The only complaint I still have with it today is that the Cacotopic Stain sequence is so short. Miéville is such a tease in that, after building it up so much in Perdido Street Station, he only gives us a measley 30 or so pages of what is probably his most incredible, terrifying creation in any of his books.

Anyway, I need to read this one again soon. Absolutely love it. It's my equal favourite book of his, alongside The Scar, and right ahead of Embassytown.