The Silver Spike by Glen Cook

The Black Company has departed into the far south, taking Lady with them. For Darling, Raven, Case and the other outcasts from the Company, their future is uncertain. But when an enterprising band of treasure hunters steals the Silver Spike, within which lies imprisoned the undying essence of the Dominator, the world is again thrown into jeopardy and the heroes of the northern wars are called back into service. 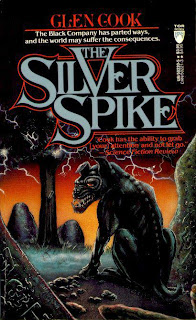 The Silver Spike is a novel set in the Black Company universe, though not part of the main series. It's instead a 'sidequel', picking up after the events of the third novel in the series but taking a different group of characters off in another direction and following their adventures.

It's an interesting book, and I suspect one of the more contentious in the series. On the one hand, it's Cook on form, delivering an epic story of clashing forces ranging over vast distances but contained in a single volume. On the other, it's probably one of the starkest and most cynical books I've ever read in the epic fantasy subgenre.

In the earlier books in the series (published in the 1980s before this kind of thing became par for the course) Cook overthrew a lot of the conventions of the subgenre. The good guys sometimes did evil things and the bad guys sometimes showed compassion or mercy. The principal villain of the first three books is a hero (or at least a protagonist) in the next two. There was a high degree of cynicism, but also the apparent presence of hope .

The Silver Spike has little truck with that. There are masses of death and destruction, conveyed in a wearying tone that is at times genuinely depressing. The costly victories of our 'heroes' in the first trilogy are revealed to be brief as new villains (albeit of lesser magnitude) arise to replace the ones defeated first time around. One of the antagonists in this volume and (SPOILER WARNING!) one who gets away scott-free at the end is a murderous paedophile (apparently Cook's angry commentary that sometimes the worst people prosper). Those who do put their lives on the line to save the world end up fading into obscurity in a backwater, uncelebrated and unremembered. 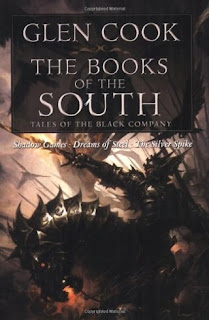 It's a dark and grim novel that is not a happy read, for all of Cook's excellent writing skills. It's the epic fantasy equivalent of one of those 'difficult' albums that you listen to for the technical accomplishment or emotional power but you wouldn't in a million years put on at parties. It's an angry, harsh and raw book.

Characterisation is pretty good, with the 'antihero' cast of thieves and adventurers well-drawn, for all their nauseating habits. Raven is a bit more one-note than in previous books, but Case (our part-time first-person POV character for this volume) develops into a more complex, interesting character, as does Darling. There is a degree of repetition in the volume that regular series readers might find a tad predictable (Darling's use of the weird creatures from the Plain of Fear as her own personal army, yet again) but otherwise Cook's reliable powers of characterisation and plot development are in full force.

The Silver Spike (****) is a dark, grim and at times rather nihilistic read, but one that remains engrossing thanks to the author's writing skills. It may leave you wanting to read something more upbeat afterwards, though. The book is available now in the UK and USA as part of the Books of the South omnibus.
Posted by Adam Whitehead at 18:57

I think it’s great that you’re reviewing this series. It really is one of the greats of the fantasy genre IMHO. It’s really baffling that Cook wrote this in the 80s. The genre as a whole didn’t seam to evolve from its "lets just copy LOTR face" modus until the 90s, but Cook was clearly way ahead of his time.

Pretty much when I read this series, as each volume after the 3rd came and went, I liked the series less and less. By the time I got to the 8th and 9th volumes I was having to set myself daily page counts I had to meet.

The first three Black Company books are amazing.. but I'd never personally recommend anyone bother after that..

I mostly liked the book (though I identified problems here and there, like Raven not acting at all like he did in previous books), but I hated the end, which felt cheap.