The wars in the north have come to an end. The threat of the Dominator has been eradicated, and the remnants of the Black Company are setting out for their ancestral homeland of Khatovar. Unexpectedly joined by their former ally and enemy, the Lady, they strike out across the Sea of Torments and across the vast southern continent. But their return has been foretold and the Prince of Taglios convinces the Black Company to join his war against the enigmatic Shadowmasters, an alliance that will have long-lasting consequences for the Company and its members. 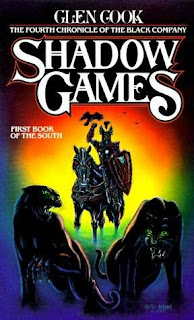 Shadow Games is the fourth book in the Black Company series and marks the opening of a fresh chapter in the history of the mercenary army. Much of the plot baggage from the first three book is jettisoned as new characters, factions and locations are introduced. Some things stay the same, such as Croaker's ongoing first-person narration, but broadly speaking this is the series moving into fresh pastures.

It's a move that is mostly successful. The book covers an enormous amount of ground, combining the Black Company's mammoth journey (of about 7,000 miles according to one estimate) with political machinations in Taglios and military action as the Shadowmasters attempt to invade Taglian territory. It's as busy a book as its predecessors but Cook's mastery of pace wins out as normal, delivering a terrifically entertaining, page-turning read.

It's only towards the end of the book that the first notable problems appear. For the first time Cook seems to have run out of space to tell his story, resulting in a cliffhanger ending and a 'shocking' revelation being made in the final pages. How successful these moves are will vary for each reader (and, given the fact that the book is commonly now published in omnibus, not a huge problem), but it does feel a shame that the book lacks the feel of being a complete novel but also standing as part of a larger tapestry that the first three volumes enjoyed.

Beyond that, Shadow Games (****) is a fine epic fantasy novel and a worthy continuation of the series. It is available now in the UK and USA as part of the Books of the South omnibus.
Posted by Adam Whitehead at 16:45