The pilot episode for the new Battlestar Galactica spin-off show, Blood and Chrome, has been completed. Composer Bear McCreary made the announcement yesterday, revealing he'd just completed the soundtrack for the episode. SyFy will apparently be announcing shortly plans for transmitting the pilot. 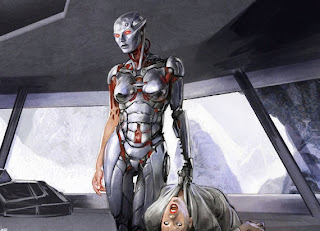 Concept art for the pilot, released by SyFy.
Set in the tenth year of the First Cylon War (or 44 years before BSG begins), Blood and Chrome will follow the young pilot William 'Husker' Adama (Luke Pasqualino) as he is assigned as a Raptor pilot aboard the battlestar Galactica. Apparently the series will follow his reassignment as a Viper pilot and the ongoing war against the Cylons. This will necessitate some re-jigging of continuity, as the Razor TV movie previously suggested that Adama only saw action on the very last day of the war.

The new series was created and developed by David Eick and Michael Taylor, who both worked on BSG. BSG showrunner Ronald D. Moore has moved onto other projects and will not be involved on Blood and Chrome.
Posted by Adam Whitehead at 16:46

"This will necessitate some re-jigging of continuity, as the Razor TV movie previously suggested that Adama only saw action on the very last day of the war."

I think this is incorrect, I don’t think any version of Razor said that. I believe it was only said in the parts of the webisodes that weren’t used in any of the two editions.