Whilst playing Skyrim, it has often occurred to me that what the game really lacked was that space core from the end of Portal 2 floating around like ten feet behind you occasionally bellowing, "SPAAAACE!" in its unique style. 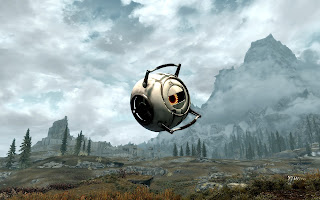 "I'm in space. And by 'space' I mean 'Tamriel'."
Of course, Valve and Bethesda have recognised this glaring deficiency in the game, and created a mod that allows the space core from the end of Portal 2 to float around behind you and etc.

The same update also adds high-resolution texture packs to make the PC version of the game look totally awesome(r) and activates the Creation Kit, which allows you to adjust and tweak all aspects of the game, but frankly this is just small fry compared to the space core thing. 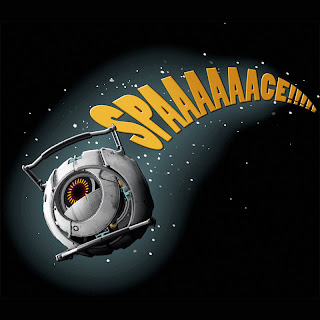 So, does this mean that it is now canon that the Half-Life/Portal and Elder Scrolls franchises take place in the same universe? Will we see headcrabs and Combine invade Tamriel in The Elder Scrolls VI? Will Dragonborn and Mammoths show up in Half-Life 3? No. Don't even go there.
Posted by Adam Whitehead at 21:18

The Space Core isn't an update. It's an optional mod found in the Steam Workshop.

The texture packs aren't an update, either, they're an optional free DLC pack.

I disagree. I don't think it's really optional at all. How can I play Skyrim without this?

possible quest in there somewhere too. we'll just have to wait and see.