With publication of Joe Abercrombie's Red Country just a few months away, review copies have been released into the wild and promotional materials are doing the rounds. Impressively, these have revealed that The First Law has now sold more than 1 million copies worldwide (though not specifying whether this was just the trilogy or includes the two stand-alone novels as well). An impressive achievement from Joe there. 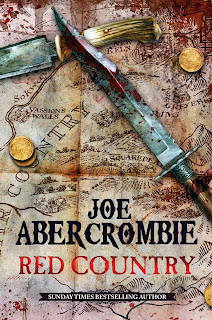 Meanwhile, Gollancz has revealed (via Twitter) that the current working release date for Richard Morgan's The Dark Defiles - the conclusion to the Land Fit For Heroes series - is August 2013. There are two previews of the book currently up on the author's blog.

Intriguingly, Morgan has hinted that The Dark Defiles might become too large for one volume, and he and Gollancz are looking at the manuscript to see if it will be one huge book or two merely biggish ones. Watch this space for news on that.
Posted by Adam Whitehead at 16:53

I'm not surprised that Joe Abercrombie is selling so well. Someone once posted at Westeros that his first book sold more than A Game of Thrones back when it was released.

How do those figures compare to other authors in that genre?

For a relatively new author with only five books under his belt? Superbly. A couple of years ago it was reported that David Gemmell had sold 1 million copies of 30-odd books in a career of 25 years.

Compared to the heavyweights, GRRM is closing on 20 million, RA Salvatore is over 30 million, Robert Jordan is about 50 million and Terry Pratchett has crossed 70 million. And that's before reaching Tolkien (a quarter-billion sales, at a very rough estimate) and Rowling (400 million and climbing).