Some new cover art popped up today. First up is The Stars Are Legion by Kameron Hurley. This isn't the third novel in The Worldbreaker Saga (that's The Broken Heavens, due in 2017) but a new, stand-alone SF novel. Here's the cover and blurb: 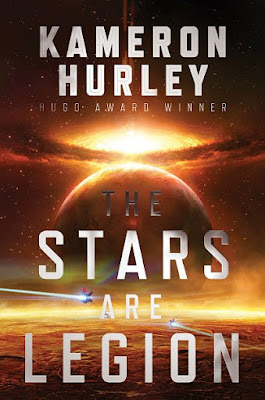 "Somewhere on the outer rim of the universe, a mass of decaying world-ships known as the Legion is traveling in the seams between the stars.Here in the darkness, a war for control of the Legion has been waged for generations, with no clear resolution.

As worlds continue to die, a desperate plan is put into motion.

Zan wakes with no memory, prisoner of a people who say they are her family. She is told she is their salvation - the only person capable of boarding the Mokshi, a world-ship with the power to leave the Legion. But Zan's new family is not the only one desperate to gain control of the prized ship. Zan finds that she must choose sides in a genocidal campaign that will take her from the edges of the Legion's gravity well to the very belly of the world.

Zan will soon learn that she carries the seeds of the Legion's destruction - and its possible salvation. But can she and the band of cast-off followers she has gathered survive the horrors of the Legion and its people long enough to deliver it?

In the tradition of The Fall of Hyperion and Dune, The Stars are Legion is an epic and thrilling tale about tragic love, revenge, and war as imagined by one of the genre's most celebrated new writers.

The Stars Are Legion will be published by Saga Press on 4 October 2016."


The next book is An Accident of Stars, the first novel in The Manifold Worlds series by SFF blogger and essayist Foz Meadows. 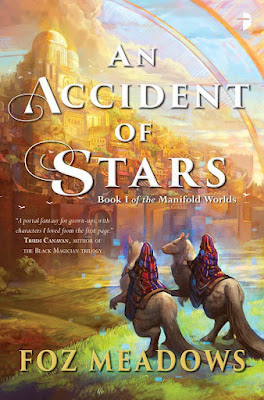 "When Saffron Coulter stumbles through a hole in reality, she finds herself trapped in Kena, a magical realm on the brink of civil war.

There, her fate becomes intertwined with that of three very different women: Zech, the fast-thinking acolyte of a cunning, powerful exile; Viya, the spoiled, runaway consort of the empire-building ruler, Vex Leoden; and Gwen, an Earth-born worldwalker whose greatest regret is putting Leoden on the throne. But Leoden has allies, too, chief among them the Vex'Mara Kadeja, a dangerous ex-priestess who shares his dreams of conquest.

Pursued by Leoden and aided by the Shavaktiin, a secretive order of storytellers and mystics, the rebels flee to Veksh, a neighboring matriarchy ruled by the fearsome Council of Queens. Saffron is out of her world and out of her depth, but the further she travels, the more she finds herself bound to her friends with ties of blood and magic.

Can one girl - an accidental worldwalker - really be the key to saving Kena? Or will she just die trying?"


An Accident of Stars will be published by Angry Robot on 2 August 2016.
Posted by Adam Whitehead at 22:12

Definitely want to read An Accident of Stars!