1979. There is a war brewing between a drugs gang based in Kansas City and an operation run by the Gerhardt family in Fargo, North Dakota. The conflict unexpectedly spirals out of control after an innocent couple, Peggy Blumquist and her butcher husband Ed, accidentally kill one of the Gerhardt sons. The conflict escalates, with Minnesota State Trooper Lou Solverson left to investigate and find those responsible. 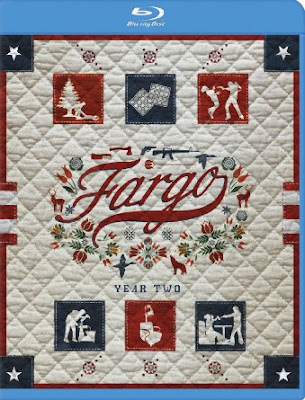 When FX announced they were making a TV series based on the 1996 movie Fargo by the Coen Brothers, a lot of people including the Coen Brothers thought they were insane. Instead, the first season of Fargo turned out to be, quite possibly, the greatest individual season of television since (at least) the fourth season of The Wire aired a decade ago. The bar was raised impossibly high for a second season.

Fortunately, writer/producer Noah Hawley had a trick up his sleeve. Fargo is, at least nominally, an anthology series where each season has its own cast and self-contained story. The seasons all take place in the same fictional universe (as each other and the film) so references and very occasional characters cross over, but overall each season stands alone as its own story. And throughout the first season, the character of Lou Solverson (Keith Carradine) makes oblique references to something horrendous that happened in Sioux Falls in 1979. Season 2 tells us that story.

That tale is nothing less than a war story, a clash for territory and control between the Kansas City Mob and the Gerhardt family based in Fargo, North Dakota. The situation escalates into all-out war when one of the sons of the Gerhardt family is inadvertently killed by Peggy and Ed Blumquist (Kirsten Dunst and Jesse Plemons), a quiet, ordinary couple trying to live the American Dream in their own way. Ed is soon mistaken as a ruthless, murderous contract killer ("The Butcher") by both the Gerhardts and the Kansas City boys, with local law enforcement officers Hank Larsson (Ted Danson) and Lou Solverson (Patrick Wilson) having to try to protect the hapless couple.

That's not really the whole story. There's also Lou's home issues, with his wife Betsy (Cristin Milioti) suffering from cancer. There's the murderous gun-for-hire Mike Milligan (Bokeem Woodbine) who works for the Kansas City crew but finds his career prospects hampered by racial prejudice. And there's a very enigmatic Native American Hanzee Dent (Zahn McClarnon) who works for the Gerhardt family as an enforcer...up to a point. And that's not even mentioning the misadventures of local drunk lawyer Karl Weathers (Nick Offerman) and the fact that Ronald Reagan (Bruce Campbell) is hitting the campaign trail in the state int he midst of the chaos.

The second season of Fargo is busier than the first and, it has to be said, is not quite as good. However, it's still probably the single finest season of television you'll see this year. The second season is a little more diffuse, less focused and less finely-characterised than the first season. We don't have quite as finely-tuned a clash of personalities as the three-way battle of wits between Lorne Malvo, Lester Nygaard and Molly Solverson in the first season. But it's damn close. The second season feels a bit more inclined to pursue random tangents for the sake of character or even just a laugh (whoever cast Bruce Campbell as Ronald Reagan needs to be given a raise, immediately) before pulling itself together in the last few episodes to deliver the promised carnage at Sioux Falls and it delivers that with aplomb.

Plaudits can be poured onto the series freely. Kirsten Dunst and Ted Danson are two very familiar faces from American film and television, but here give career-best performances. Dunst plays Peggy as a somewhat self-obsessed (if not blinkered) housewife in a marriage to someone who doesn't entirely suit her, but then is unexpectedly able to capitalise on the carnage to help her "self-actualise" (to borrow her self-help guru's terminology), although fortunately not in as quite an evil direction as Lester in the first season. It's a tricky character to nail but Dunst does so with impressive skill. Danson also does excellent work as the sheriff trying to keep a lid on the chaos that is threatening to blow up in his town. In fact, all of the actors put in incredibly strong turns with Patrick Wilson being totally convincing as the younger version of Keith Carradine's character from the first season and Nick Offerman delivering a dramatic, powerful performance that shows his much greater range than just playing comedy, as he has done recently (although his drunk lawyer character does provide a few laughs as well).

Complaints? Well, the pacing is a bit odd. The central story is surprisingly thin, and unlike the first season this one feels like it could have had a few episodes shaved off it...until you get to the final three or four episodes which come after that peak and realise the genius of the writers in how they've structured the season. So that complaint is pretty quickly dispensed with. As mentioned above the show is a bit more willing to explore tangential subplots this year, but most of those subplots are excellent in their own right, so that's not really an issue either. Something that has sharply divided viewers is the emergence of science fictional elements in the story, which twice (in the first and ninth episodes) play a decisive role in events. My guess is that isn't really an SF element at all and is a result of the writers planting story seeds for future seasons, but in the context of this year by itself feels very random, although it does play into the 1970s theme quite well.

But it's still a gripping, intelligent and beautifully-written season (****½) of television, with an even larger hint of the weird about it. The series will be released on 23 February on DVD in the United States and on 25 April (because it takes two months to cross the Atlantic in 2016, clearly) in the UK. The show will be released on Blu-Ray as well but these editions have not yet been listed.
Posted by Adam Whitehead at 22:58

Ted Danson at this point is a national treasure. If you haven't seen him on Bored to Death or on his many guest spots on Curb Your Enthusiasm, he's just awesome. Not to mention Cheers.

All well and good, but how many stars?!

Whoever did the casting on the 2nd Season did a brilliant job. Kirsten Dunst, in particular, is a huge revelation and entirely nails her character in every scene. The entire show is interesting, compelling, gruesome (but as befits the storyline) and has as many twists and turns as most viewers can or would want to follow in a show broken up into a dozen episodes spread over as many weeks. Thank God for DVRs. I'm a Minnesotan by birth so I love the way the Coen brothers first introduced the entertainment World to the character of Minnesota -- though it clearly showcases the mid-state to Northern mindset and mannerisms as opposed to the characteristics of the more Cosmopolitan Southern Minnesota populace. In my opinion, the writing, acting, music and production of the first two seasons is exemplary. The Third Season begins this Wednesday (April 19th) and I truly look forward to seeing a new Minnesota-ized story -- with great acting and extremely clever writing. The style of these storylines could not happen in any other State of the Union. Just love it all! KEEP UP THE GREAT WORK!!!!