Overlook Press have revealed the cover art for The Unholy Consult, the fourth and concluding volume in R. Scott Bakker's The Aspect-Emperor quartet, the second part of The Second Apocalypse mega-series. 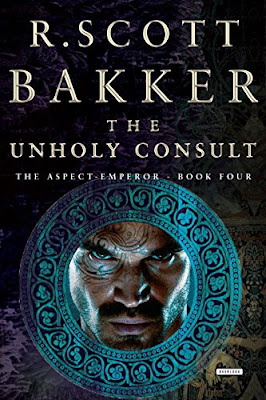 The Unholy Consult brings this particular part of the saga to a close, but Bakker plans to write another series - either a duology or trilogy - to wrap up the saga of Kellhus and the Second Apocalypse for good. Apparently the name of this final series would be a spoiler, so will not be revealed until after The Unholy Consult is released.

The Unholy Consult will be released in the United States on 4 July 2017. It will be accompanied by an extensive "Encyclopediac Glossary" (similar to the one in The Thousandfold Thought) revealing a lot more about the history of Earwa.
Posted by Adam Whitehead at 16:00

Email ThisBlogThis!Share to TwitterShare to FacebookShare to Pinterest
Labels: cover art, news, r. scott bakker, the aspect-emperor, the prince of nothing, the unholy consult

If the name of his next series is a spoiler then he shouldn't use it at all. Otherwise every new reader he gets will automatically get spoiled. Wonder if he'll realize that...?

He'd realize that. Kind of like a main characters of the book, the question is why?

I was about to say pretty much what Silent said.
Spoiling the fun for any reader who isn't up to date with TOC is bordering on the disrespectful. Why he would do this is beyond my understanding. I hope his editor / publisher will talk him out of that.

What's with that absurd cover art, the same uninspired theme over and over?

I posted a comment to that effect on his blog, which he didn't respond to. As I said in the post, the only reason I can think of for spoiling the entire series for future fans is because he's had the names of the books in his head for so long that he can't let go. Let go, Scott!