Colombia, 1992. Drug kingpin Pablo Escobar is possibly the richest man in the world, the head of a vast narcotics operation spanning much of South and Central America. But the Colombian and American governments are keen to bring him down. The DEA is on Escobar's trail but find his network of informants and sympathisers makes it hard to pin him down. If they are to bring Escobar to justice, they may have to make a deal with the devil. 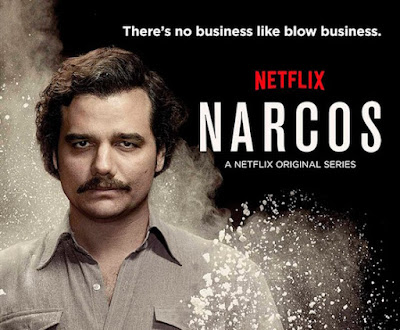 The first season of Netflix's Narcos was an interesting, unconventional series. It mixed the tropes of traditional drama with the docudrama, a necessity of it trying to cover about fifteen years of complex political and criminal manoeuvring in just 10 episodes. This made for an interesting drama, but one which had a very intermittent, start-stop feel to it as sometimes years passed between each episode and major events were relayed in voiceover.

Season 2 fortunately improves on this by devoting itself to the final eighteen months or so of the Medellin Cartel's existence, and focusing much more on the hunt for Escobar by the DEA, the Colombian government and by rival criminal organisations. There's a real feeling of tension, intense drama and things gradually collapsing as Escobar's enemies rack up the pressure, but he is more than capable of hitting back.

The series hinges on the viewer being able to understand Escobar and even - if only fleetingly - sympathise with him whilst not sugar-coating the fact that he was a monster, a criminal whose impact on the world (particularly the flooding of the USA with cocaine in the late 1980s and early 1990s) has few rivals. This works purely through Wagner Moura's excellent performance, capturing the family man but also the ruthless drug kingpin and the person who believes himself to be a man-of-the-people folk hero sticking it to the man, who gradually realises that perhaps he isn't who he wants to be. As the mayhem rises and Escobar becomes more and more ruthless, resorting to mass murder, political assassination and ill-thought-out revenge killings, so whatever semblance of normality and likeability he had vanishes and he becomes a target for everyone. How true this is to reality and how much is dramatic invention is debatable, but certainly it makes for a gripping and tense drama.

The rest of the cast also bring their A-game (although Boyd Holbrook is a bit anonymous) to make for an increasingly intense chase story that does a good job of both wrapping up the Escobar story but also putting things in play for later one, for as the Medellin Cartel goes down in flames, a rival cartel is starting to take shape in Cali, and the players have to accept that defeating Escobar doesn't mean the end of the monster he has created.

Season 2 of Narcos (****½) is superior to the first, more grounded in character drama and forming a far more intense game of cat-and-mouse that can only have one ending. It's also a story of hubris, murder and of a country near-ruined by criminals and their associates, but trying to fight on. It is available now on Netflix.
Posted by Adam Whitehead at 13:18

The country's name is Colombia ;)