Prince Teppic is the heir to the desert kingdom of Djelibeybi*. His father, a non-traditional man with odd ideas, decides to send him to get the best education possible outside of the Old Kingdom, by sending him to join the Ankh-Morpork Assassins' Guild. Seven years later, Teppic is summoned home by sad news and sets about building the greatest pyramid ever seen on the Disc. This proves to be a Very Bad Idea. 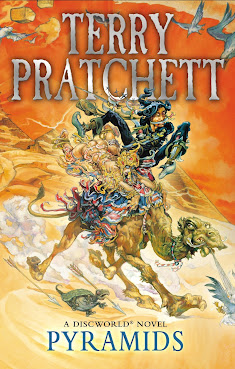 Pyramids is one of those rare books in the Discworld series, being a total stand-alone. Its characters and events do not recur elsewhere in the series (brief cameos by Death and the Librarian excepted) and its events are barely referred to elsewhere. It's a viable jumping-on point for new readers, although in terms of quality it's not among the best books in the series, though certainly not among the weakest either. It's a middling Discworld book which, fortunately, means it's pretty good.
The book is primarily concerned about ossification, ritual and conservatism, how slavishly following ideas because they're old and "have always worked" is not good enough and can lead to long-lasting harm. It's also Pratchett's first tilt at religious fundamentalism, and how people in power use and abuse religious faith to further their own ends, although here he takes the idea to extremes by having the fundamentalist being so unflinching in his belief that he's become incorruptible by dint of every idea outside of his very narrow worldview simply bouncing off him. Pratchett would address these ideas again later on in Small Gods.
Pyramids risks being a lazy comedic novel using stereotypes (the times Pratchett does this, with "fantasy China" in Interesting Times and "fantasy Australia" in The Last Continent, are among the Discworld series' weaker efforts) and the presence of gags about pyramids, mummies and the Sphinx do occasionally teeter on the edge of Carry On territory, but Pratchett does back off and instead uses the setting as a framing device for more interesting ideas about religion and science. The result is probably the best fantasy novel inspired by Egypt outside of N.K. Jemisin's more original Dreamblood duology.
The novel also has an interesting structure which seems to be inspired by the original Star Wars movie. Although Teppic is somewhat more worldly wise, he does have a Luke Skywalker vibe going on, whilst his much more charismatic friend Chidder has a Han Solo thing . Chidder even owns an unconventional freighter which is actually a faster-than-expected smuggling ship (the Unnamed), and both have tension with the beautiful Ptraci, who turns out to have a secret identity you're already probably well ahead of the curve on. Oh, and there's even a hairy sidekick who can't talk English but is vastly more intelligent than anyone expects. Once this was pointed out to me I couldn't ignore it.
Finally, the novel riffs on the state of hard science fiction in the late 1980s. Back then there was a seismic shift going on as the SF genre stopped focusing so much on spaceships and adventure stories in favour of long, complicated novels and series about cutting-edge ideas. SF authors were scrambling to stay current ideas being theorised by the likes of Stephen Hawking - A Brief History of Time came out whilst Pratchett was writing Pyramids - even if they didn't fully understand them, leading to lot of novels about knotty time travel or black holes where the word "quantum" is subjected to a lot of questionable abuse. Pratchett has great fun riffing on this tendency, whilst also employing it himself, with the novel featuring some clever ideas on time running at different speeds and time warps stripping people of some of their dimensions.
There's a lot going on in Pyramids (****) - it was the longest Discworld book to this point, though still not cracking 400 pages - and sometimes it feels a bit crammed with ideas that it doesn't have time to fully explore, which is why some overspill into later novels (Small Gods addresses some of the same themes more elegantly). It's a funny book but also a smart one with some really cool ideas about time, space and advanced camel mathematics. It is available in the UK and USA. I previously reviewed the book here.
* Pratchett was reportedly disappointed that Americans didn't get this joke, so created the nearby kingdom of Hersheba just for them.
Posted by Adam Whitehead at 11:40

Over two Discworld read-throughs, Pyramids is one of the better, with an abundance of jokes that felt fresh the second time around as well.

Still, one of the foulest Josh Kirby covers. Perhaps not quite as egregious as Moving Pictures, but dire nevertheless.

Since I'm an uninformed kraut, could you enlighten me about the Djelibeybi pun? :) Because I don't get it, either.

Djelibeybi would be understood by readers in England as Jelly Baby, an english sweet or candy shaped like a small baby. Similar to the Gummy Bear candy sold in America.