Having removed the problems caused by Gus Fring and his criminal empire, Walter White is now an independent operator. Aided by the increasingly guilt-riven Jesse, Walter cooks extravagant amounts of meth and distributes it with the reluctant help of his ex-wife. However, the DEA is continuing its investigation into "Heisenberg" and Walter becomes increasingly desperate - and lethal - in covering his tracks. 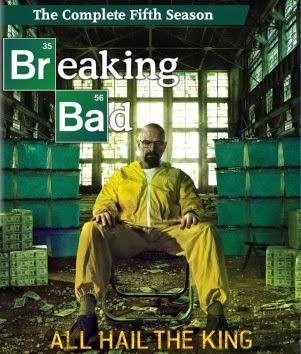 The final season of Breaking Bad was split in half to give the writers and actors more time to prepare the grand finale of the story. When you're making what a lot of people are calling the greatest TV show ever made, taking some extra time to give it a good send-off is a good idea. However, it does leave the penultimate chunk of the series in a little bit of limbo, with some wheel-spinning to do before the explosive ending can arrive.

The result is probably the weakest run of episodes in the Breaking Bad canon, although this is still very relative. Certainly the show remains almost as well-acted and well-written as ever, with a few more clumsy moments than normal. An odd moment with Walter going Don Corleone and pompously declaring that he forgives his wife for a perceived betrayal feels like self-parody, and early episodes with Mike and Jesse declaring they are out of the meth business, then back in, and then out again feel a little redundant. New character Lydia is also under-utilised, which is a shame as they cast the superb Laura Fraser in the role and gave her some good moments but then nothing more to do.

On the flipside, the show gives us one of its most memorable moments in the train heist episode. Although completely implausible, it is rollicking good fun and capped off by a disturbing, powerful ending that sets the tone for the end of the season (and the whole show). Dean Norris does a great job as Hank finally seems to be easing off from his pursuit of Heisenberg, right up until a masterfully-executed plot revelation leaves the half-season on one hell of a cliffhanger.

The first half of the fifth season of Breaking Bad (****½) is the show at its most stretched-out, but it mostly avoids problems by coming back strong after every weaker moment with a powerfully-written scene or piece of dialogue. Events build to a memorable finale which sets things up for the conclusion. It is available now as part of the Breaking Bad Complete Collection in the UK (DVD, Blu-Ray) and USA (DVD, Blu-Ray).
Posted by Adam Whitehead at 16:08