Harve Bennett, a veteran Hollywood scriptwriter and producer, has passed away at the age of 84. He had been suffering from oral cancer for a number of years. Bennett had a long and storied history in genre TV and film, but he is best known for his work on the Star Trek movies, with many crediting him for saving the franchise from obscurity after the troubled release of Star Trek: The Motion Picture in 1979. 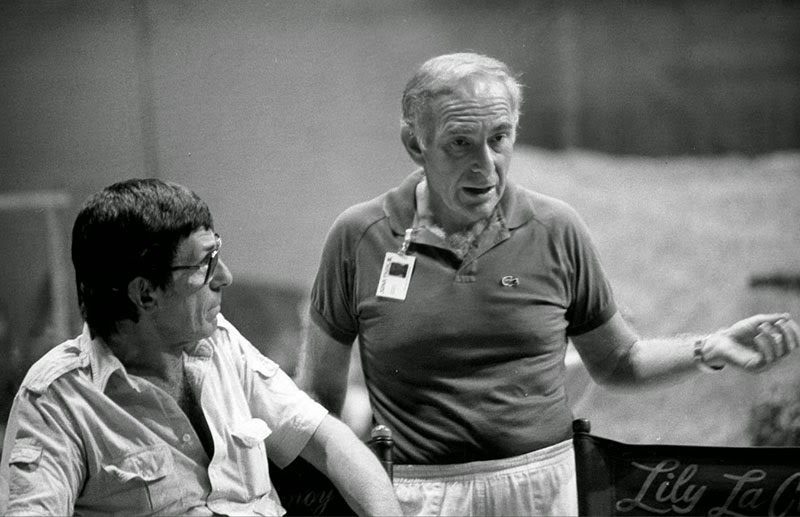 Born in 1930, Bennett worked in radio before a brief stint in the US Army and then joining the nascent film and television business in Hollywood. He worked through the corporate system, becoming Vice President of Programming at ABC, before switching to a more creative career. He developed The Mod Squad with legendary Hollywood producer Aaron Spelling and produced it from 1968 to 1973. He then teamed up with Kenneth Johnson to produce The Six Million Dollar Man (1973-78) and its spin-off, The Bionic Woman (1976-78). Bennett gained an impressive reputation for making quality work from very small budgets.

In 1980 Bennett was called for a meeting at Paramount. Paramount had concluded that they had dodged a bullet with Star Trek: The Motion Picture, produced for a then-monstrous budget of $45 million (almost five times the budget of the original Star Wars and twice that of The Empire Strikes Back, for comparison), but which had made almost $140 million at the box office. With the film's critical reception mixed, Paramount didn't want to take a similar risk with the sequel and asked Bennett if he could make a more exciting, faster-paced and shorter film for less money. Bennett responded that he could make five films for The Motion Picture's budget. With a budget just one-quarter that of The Motion Picture, Bennett set about making the new film.

Only vaguely familiar with the original series, he sat down and watched all 79 episodes over several days. He made special note of the first season episode Space Seed for its charismatic villain, Khan, played by Ricardo Montalban, and decided that he would make for a memorable enemy in the new film. With a short production schedule looming and no final script in place, Bennett called on an up-and-coming writer and producer, Nicholas Meyer, to assist. Meyer was assigned as director and performed a rewrite of the draft into a final shooting script in just twelve days, impressing both Bennett and the entire cast, who were concerned about the nightmarish constant rewrites from the original film. The resulting film, Star Trek II: The Wrath of Khan (1982), made more than seven times its budget back at the cinema, was a huge critical success and ensured that the franchise would continue.

Bennett returned as producer and writer for Star Trek III: The Search for Spock (1984), co-wrote Star Trek IV: The Voyage Home (1986) with Meyer and produced Star Trek V: The Final Frontier (1989). Bennett was developing ideas for a prequel film set at Starfleet Academy with a young Kirk and Spock when Paramount decided to do a "last hurrah" with the original cast instead. Bennett was offered the writing and producing gig, but turned it down in favour of Nicholas Meyer. Although Paramount offered Bennett the chance to make the prequel film after Star Trek VI: The Undiscovered Country (1991), Bennett turned them down and left Paramount. He subsequently created and produced the moderately successful SF TV series Time Trax (1993-95). Bennett's basic concepts of a prequel film eventually saw the light of day, in a somewhat different form, in J.J. Abrams's 2009 reboot movie.

Harve Bennett's impact on the Star Trek franchise cannot be underestimated: after The Motion Picture almost sunk it, his ingenious spending plans allowed the franchise to continue at a reduced cost. The films revived interest in the franchise and led to the creation of Star Trek: The Next Generation (1987-94) and its three spin-off series. Without Bennett and the work of his collaborators Nicholas Meyer and the late Leonard Nimoy (who directed Star Trek III and IV, as well as working on the scripts for III, IV and VI), it is questionable if the franchise would have gotten past those first couple of films.
Posted by Adam Whitehead at 15:40

Email ThisBlogThis!Share to TwitterShare to FacebookShare to Pinterest
Labels: harve bennett, leonard nimoy, memorials, star trek, the final frontier, the search for spock, the undiscovered country, the wrath of khan