Ridley Scott's production company is developing a film based on the Flashman novels by George Macdonald Fraser. 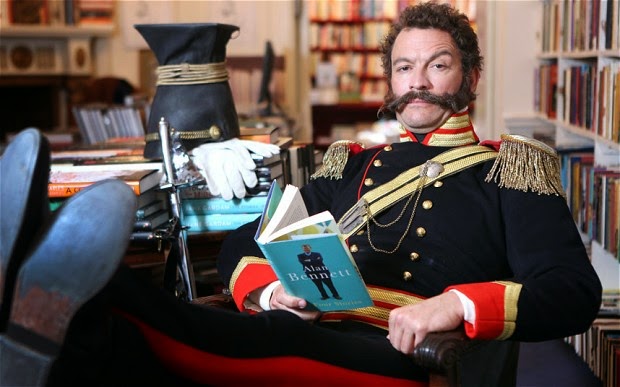 Dominic West casually putting it out there that he'd be down for this.

Fraser published twelve Flashman books in his lifetime, before his death in 2008. The books chronicle the military career of the fictional Harry Flashman. Flashman is a minor character in Thomas Hughes's 1856 novel John Brown's School Days, a noted bully and coward expelled from Rugby School for drunkenness, and Fraser decided it would be amusing to see what happened to him next. The novels begin in 1839 with the 17-year-old Flashman joining the British Army and getting caught up in the disastrous events of the First Afghan War, which ended with the British forces being routed from Kabul and being completely destroyed apart from a single survivor who made it back to friendly lines (and nine soldiers taken prisoner). Fraser made Flashman a second survivor and explained his lack of recognition due to the fact he was behind enemy lines in native dress, thanks to a supreme facility for learning foreign languages quickly (which comes in handy many times in later books).

Fraser's genius was making Flashman an anti-hero, a protagonist whose first reaction to danger is to run away, hide, or, reluctantly, attempt some kind of sneaky ambush or use overwhelming firepower to make up for his own lack of personal courage. Flashman is also a lecher and a womaniser, unafraid to claim credit for others' failings and to make full use of his plaudits and unearned reputation for his own advancement. As the books continue, Flashman finds his reputation backfiring on him as he is constantly ordered to the most dangerous and lethal places in the world to serve the ends of the British Empire. As well as a commissioned soldier and officer, Flashman is employed as a diplomat, and an agent provocateur. Flashman also, by sheer reluctant experience, eventually ends up as a fairly capable military commander and is not unskilled in personal combat, even if his cowardly instincts never entirely desert him.

The books range over most of the major British military entanglements of the 19th Century, including the Crimean War, the Indian Mutiny and the Taiping Rebellion. As Flashman is a lord and noble in his own right, his own personal adventures see him winding up in various foreign conflicts as well, including recurring visits to the United States. Sadly, Fraser never wrote the story of Flashman's involvement in the American Civil War, during which Flashman apparently fought on both sides and become a personal contact of Abraham Lincoln, with whom he shared a mutual dislike. This adventure is alluded to frequently in the other books.

Although not SFF in themselves, the Flashman novels have been hugely influential in the genre. Sandy Mitchell's splendid Ciaphas Cain series of novels depict the adventures of a very Flashman-esque Imperial Commissar in the Warhammer 40,000 science fantasy universe, whilst Mark Lawrence's current Red Queen's War trilogy features Jalan Kendeth, a protagonist cut from the Flashman mould. George R.R. Martin is a huge Flashman fan and elements of Flashman's character can be found in several Song of Ice and Fire/Game of Thrones figures, most notably Tyrion Lannister. Outside of SFF, Rik Mayall's memorable character Lord Flasheart from the Blackadder TV series appears to be based on Flashman's public persona (the brave braggart, unstoppable warrior and unrelenting lech), although Blackadder himself is closer to Flashman's true character.

Ridley Scott's plans for the character are unclear, as one of the strengths of the character is that you can drop in on him at any time in his life. Actor Dominic West (The Wire, The Hour) is a huge Flashman fan and has made appearances as the character, so if they're aiming for the middle-aged Flashman he would seem to be the logical choice.
Posted by Adam Whitehead at 21:54

Okay, I was already curious about this series, but the Blackadder connection/comparison seals the deal. I have to read this!

Actually, there was an earlier Flashman movie with Malcolm MacDowell in the titular role, "Royal Flash". It had other good actors like Oliver Reed and Bob Hoskins, but it was PG, and that sort of neutered the whole thing.

A Flashman film has to be adult viewing, with an R at least.

I'd love to see this come off and be done right, it's a little saddening that Flashman's only screen legacy to date was the disappointing Royal Flash.

Awesome! I can't wait. The best thing about the Flashy novels were the detailed endnotes; giving just a hint of veracity to the fun.