Endgame. Walter White's identity as the crystal meth-cooking mastermind Heisenberg has been compromised, the law is closing in and his life is crashing down around him. White's only hope is an alliance of convenience with a criminal gang far more dangerous and ruthless than he is. But this move proves to be a mistake, leading to tragedy. 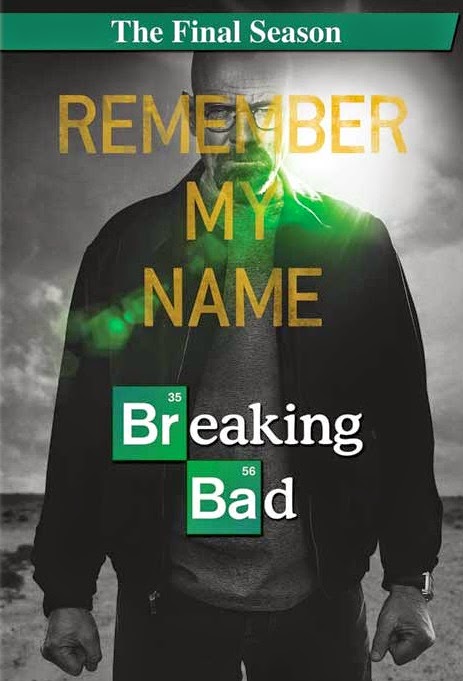 Breaking Bad's first fourth (and a half) seasons seemed to be based on one central pillar: Walter White's attempts to balance his 'public' life with his secret criminal identity. As the show approaches its finale that pillar is pulled away, leaving the show free and able to choose how it ends on its own terms. Many recent major serialised dramas - from Lost to Battlestar Galactica - have fudged their endings or (like Deadwood) been cancelled before getting there. Among its peers, only The Wire had really achieved the feat of having a satisfying conclusion that was true to everything that came before.

Breaking Bad shoots and scores. This final run of episodes is a triumph. Emotionally powerful, harshly-written and unflinching in following through the promise of earlier episodes. To borrow from another serialised drama, "If you though this was going to have a happy ending, you haven't been paying attention." And Bad delivers on that. As the clock counts down, Walter's plans for a happy ending become increasingly as crazy and outlandish as the theories of some fans anxious to see him somehow get away with everything and achieve what he'd set out to do, making enough money for his family to survive after he's gone.

There are few weak spots in this final run of episodes. Jesse gets a little lost in the mix in the first few episodes and the re-introduction of Elliott and Gretchen after an absence of four seasons is a little abrupt, but it does neatly bookend the series and help provide closure. Also, the bad guys now being white supremacist drug dealers feels a little cliched. The few times the show has faltered in following through on its premise is because it has always had a bad guy far worse than Walter hanging around to excuse his excesses (in the eyes of some viewers), and these new villains have you longing for the days of Gus Fring and his considerably better-written and motivated machinations.

Still, this is a minor issue. The central focus is on White as everything comes crashing down around him. Bryan Cranston gives a monumentally awesome performance, matched by Anna Gunn (as Skyler), Dean Norris (as Hank) and Aaron Paul (as Jesse). A huge amount of praise must go to Dean Norris, who has played his character's evolution from gun-toting lawman hick to a PTSD-suffering investigative genius over the course of the series with total conviction.

Vince Gilligan's writing team also have to be praised for coming up with an ending that is true to the series as a whole and delivering on it. The episode Ozymandias may be one of the most gut-wrenching episodes of any TV series ever made, astonishing in its dramatic power and focus. The actual ending that follows sacrifices any ambiguity for neatness and at least one unbelievable moment of cartoon ultraviolence, but the dramatic and emotional stakes are high and the show does enough to earn its ending. It is not a happy ending but it is an ending that stays true to the show and its themes, and that's rare enough in TV these days.

The final season of Breaking Bad (*****) is an unmissable triumph and a worthy conclusion to a remarkable drama series. It is available now as part of the Breaking Bad Complete Collection in the UK (DVD, Blu-Ray) and USA (DVD, Blu-Ray).
Posted by Adam Whitehead at 16:10

I think the villains being (racist) white supremacists this time was a welcome change. It would have been a strange to pit Walter against another Mexican drug-lord once again.

The last three episodes in particular are fantastic. I view Ozymandias as the climax and culmination of the whole series, and the two episodes that follow as a coda in two parts.

The show Better Call Saul has been solid so far. Its very different from Breaking Bad, while still feeling like it is set in the same world. I'd give the first half of the season a 4/5.

Probably the smartest thing that they did was decide to make the show a drama, rather than a comedy. There are funny moments, but not much more than an average episode of Breaking Bad.