Early thoughts on PILLARS OF ETERNITY

Obsidian Entertainment's latest computer roleplaying game, Pillars of Eternity, was released three days ago and has attracted blanket critical acclaim from the gaming press. Pillars hits the sweet spot of nailing the nostalgic feel for the RPGs of yesteryear whilst also bringing some modern sensibilities on board. It's not flawless - in fact I'm rather surprised that some of its more glaringly obvious interface and presentation flaws have been brushed over by reviewers - but it's a pretty excellent game so far. 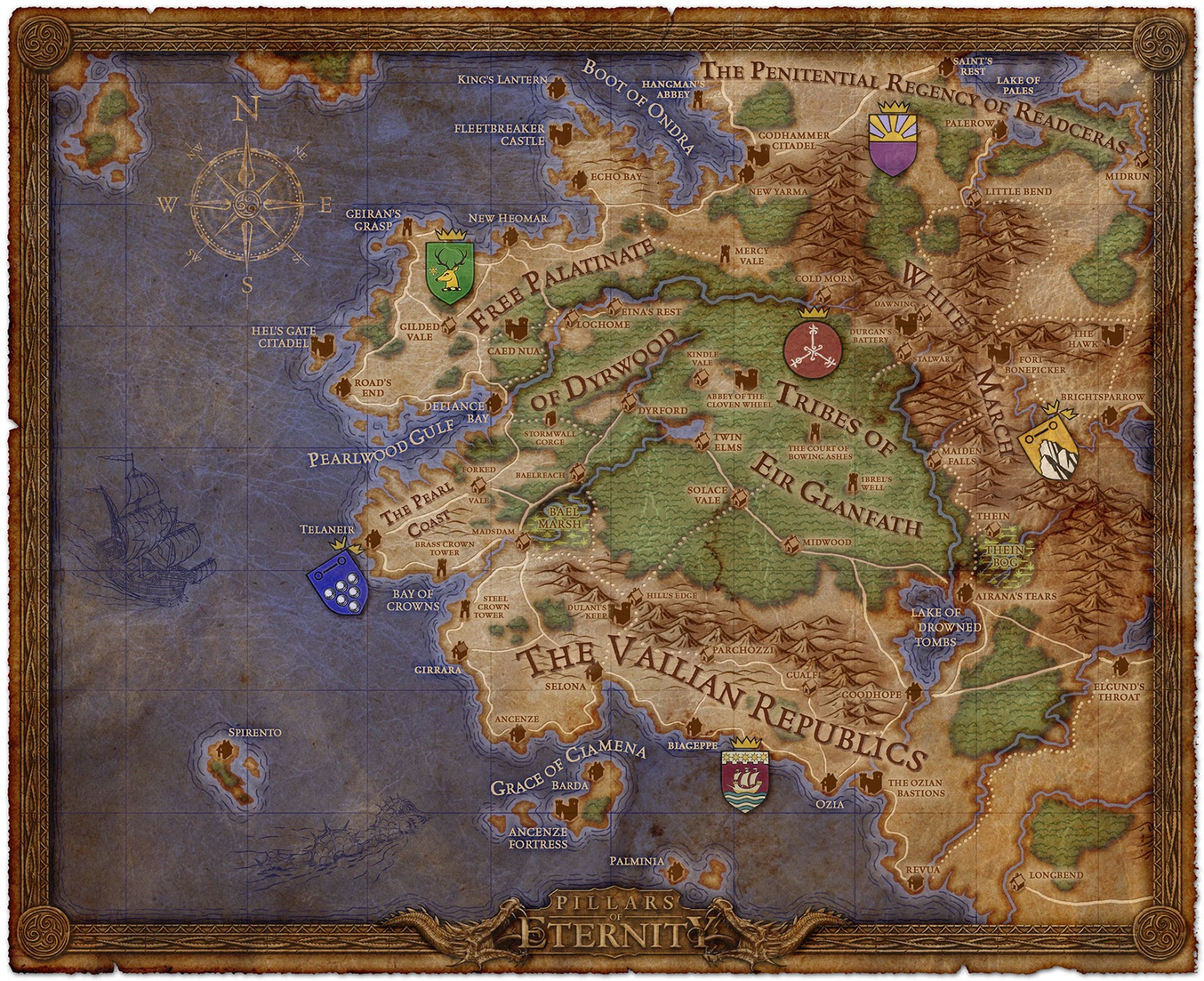 Obsidian was formed out of the ruins of Black Isle, Interplay's in-house CRPG development studio which created the Fallout franchise and worked on the Icewind Dale series, as well as creating the single greatest CRPG of all time, Planescape: Torment. They also published the Baldur's Gate series (developed by a nascent BioWare before they were swallowed by the EA machine) and helped with the development of Baldur's Gate II. After the collapse of Black Isle, the reconstituted Obsidian developed games including Neverwinter Nights II, Star Wars: Knights of the Old Republic II, Dungeon Siege III, Fallout: New Vegas, Alpha Protocol and South Park: The Stick of Truth.

However, as an independent studios working on-hire for big publishers, Obsidian found themselves at the mercy of publishers changing contracts, altering terms and conditions and drastically cutting development time at limited notice. On no less than three occasions, Obsidian games were released buggy (Fallout: New Vegas), not-quite-complete (Knights of the Old Republic II) and apparently in a barely tested beta build (Alpha Protocol). On all three occasions the publishers were to blame: Bethesda did not run sufficient QA on New Vegas* (something they have a reputation for on their own titles, with Daggerfall and Oblivion in particular released in a buggy state, with even the mighty Skyrim suffering from problems); LucasArts reversed a deadline extension for KotOR II at the last moment*; and the people at Sega who had commissioned Alpha Protocol had left and their replacements just wanted to get rid of the game ASAP to save money*. 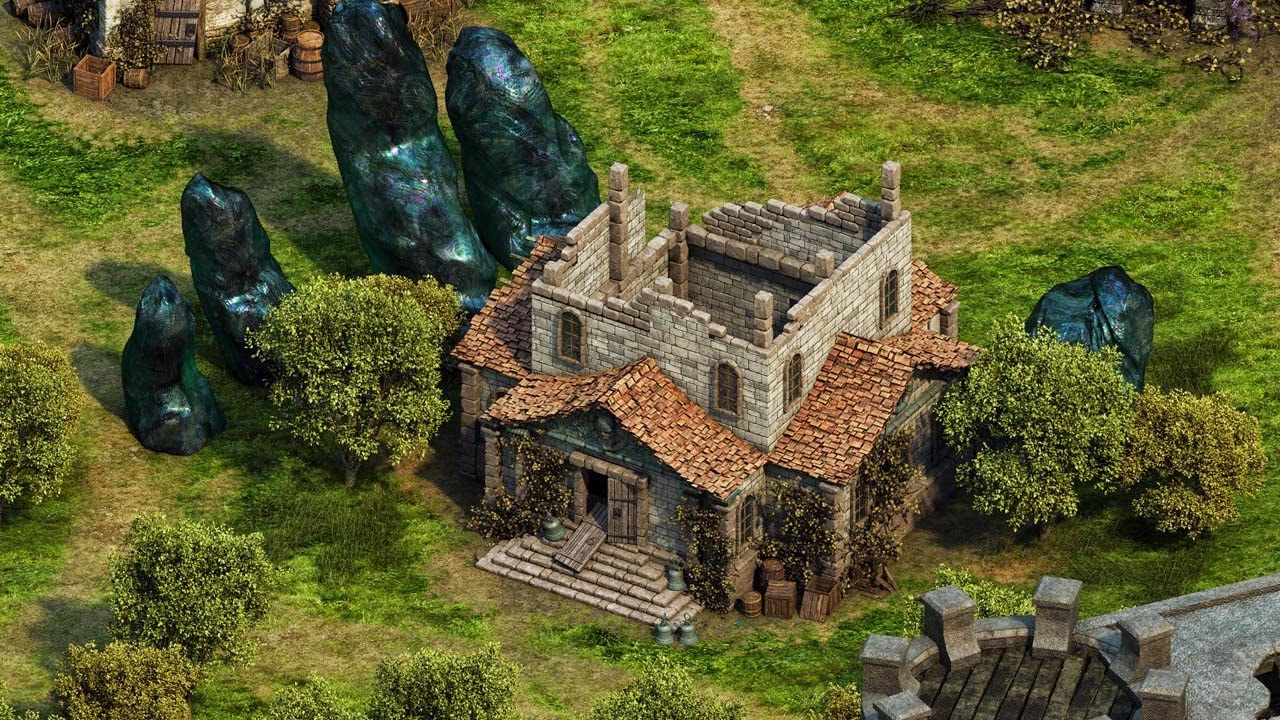 This left Obsidian with a reputation for, depending on your POV, either extreme misfortune or simply an inability to release a game that worked properly. On games where they had much greater development time and all of the agreed promises were kept, such as Dungeon Siege III and South Park, the games were delivered in a good state. However, what is remarkable is that Obsidian's laudable commitment to intelligent game systems, player choice and top-quality writing have shone through even on their most buggy games.

Pillars of Eternity was an attempt to both change that reputation, with Obsidian in total control over every aspect of development and QA, and also to bring back some of the classic feel of the old Black Isle days. The game is a homage to the Baldur's Gate and Icewind Dale series, but isn't quite as old-school fantasy as it appears. Whilst classic elves and humans and wizards are all present and correct, the game throws some curveballs into the mix, such as arctic tundra dwarves and the ability to assess non-player characters by gazing into their souls. It's a big game - at a reported 50-60 hours in length it's bigger than any Black Isle game bar the monstrously huge Baldur's Gate II, and bigger than any game Obsidian has developed before - but also one that focuses on the moments and the details. 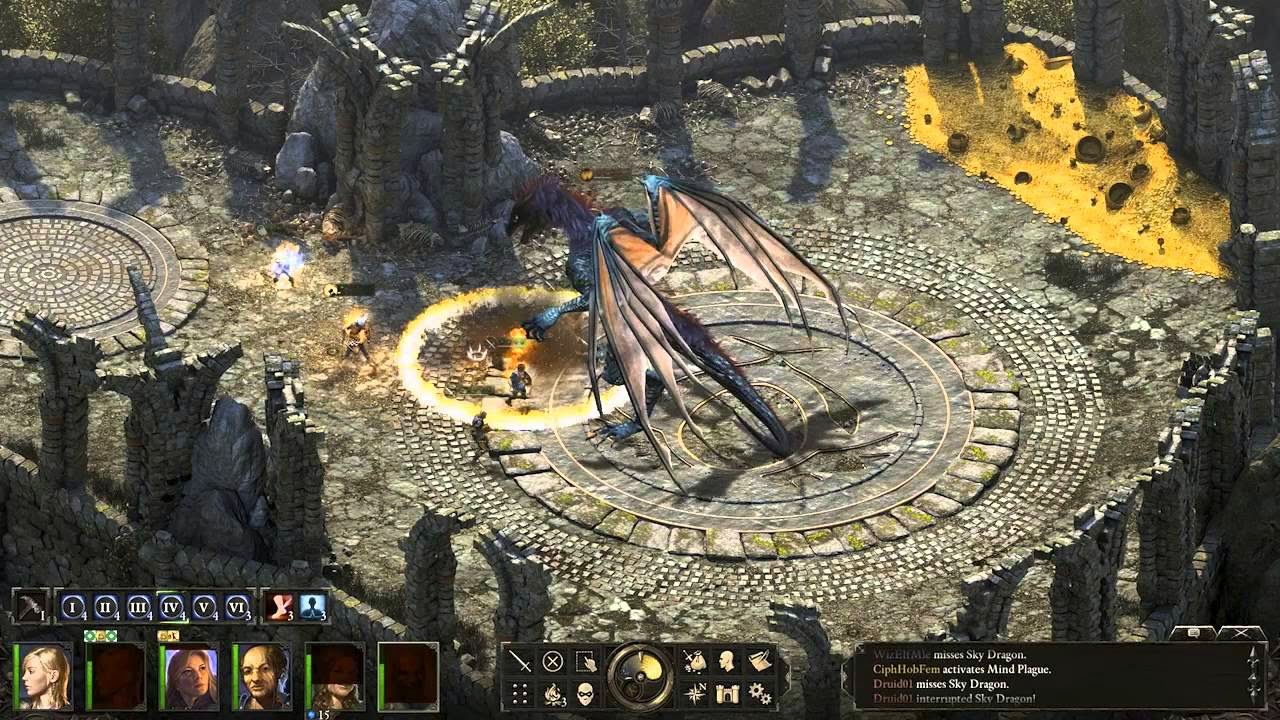 I'm now seven hours into the game and am rocking a five-member team of adventuring nutters around the Dyrwood. So far we've fought a crazy giant bear, fought off a horde of mushroom men, laid to rest dozens of zombies and almost been slaughtered by, erm, a pack of boar. My team consists of stalwart dwarven fighter (my main character), a posh elven wizard named Aloth with a nice line in sarcastic invective, a religiously-minded warrior named Eder, an enigmatic priest named Durance who likes to think he is Kreia from Knights of the Old Republic II but is actually The Sphinx from Mystery Men, and Kana Rua, a 'chanter' who sings inspiring ballads whilst unloading shots from his mobile hand cannon (did I mention the game has occasional moments where it goes randomly steampunk on the rest of the setting's epic fantasy behind?). They're a memorable, crazy bunch of characters who it's fun to go delving into dungeons with.

The game mixes up tricky side-quests (complete with trademark Chris Avellone-penned morality labyrinths) with a series of interconnected main storylines revolving around your character's newfound ability to gaze into souls, resulting in him/her becoming known as "The Watcher". There's also the interesting ability to gain control of a ruined castle and rebuild it into your own personal stronghold. You can retire to the castle between quests to re-arm and resupply. Your unused-in-the-current party NPCs can chill out there or strike out on solo, off-screen missions and you can fortify the place so it looks more impressive. Oh, and there's also a (wholly optional) 15-level mega-dungeon directly underneath the castle if you feel like an extra challenge. The game does the usual Obsidian thing of emphasising roleplaying alongside combat (although, unlike some of their other games, you can't avoid combat altogether) and you can use intelligence and wits to overcome problems as well as homicidal ultraviolence. There's also some nice ability-based effects: give your beserker barbarian some high intelligence and he or she will engage in combat more tactically and do extra area-of-effect damage to groups of enemies.

It's not perfect. Obsidian didn't quite catch all of the bugs and there's a few minor ones knocking around that are fairly irritating. There's also some very curious UI decisions. There's a "Stash" option which means you have no inventory limit and never have to worry about weight limits. This is good, because weight limits are extremely irritating and games enforcing them only serves as pedantic busywork. However, the game then doesn't allow you to rest at will to recover between fights. You have four campfires and can only rest four times before having to resupply. So you go into tough areas, make some progress, rest, make some more progress, rest, etc until you run out of campfires and have to run back to the nearest inn or store to buy some more. Which is pretty much just pedantic busywork. Obsidian giveth and Obsidian taketh away...

Far more annoying is that certain commands, including most buff spells and abilities, are not available until combat starts. So you can't cast a few bless/fortify spells upon spotting trolls in the distance before wading in. You have to trigger the fight and then cast the buffs (if you have time before the enemy close the distance) which is pretty ridiculous. For these reasons, whilst Pillars of Eternity approaches the quality of the old Infinity Engine games it doesn't quite match them in terms of user-friendliness and playability.

Still, it's the best of the recent retro-nostalgia-crowdfunded RPGs (certainly more engaging than Divinity: Original Sin and Wasteland 2, both fine games, at least so far), it's huge, it's fantastically well-written and it's easily the best traditional fantasy RPG to appear since at least Icewind Dale II in 2002 (it knocks the first two Dragon Age games into a cocked hat, that's for sure). It might all go pear-shaped in the next 43 hours, so my full final review will have until then, but for now I can firmly recommend the game.

I'm just 3 hours in and I'm enjoying it. I wish it had Divinity's or Wasteland 2's combat engine, though.

I'm about 3 hours in and I'm only just figuring out properly how the combat is structured. There is a MASSIVE penalty for trying to disengage from one target to another which I think is a good change. Also in regards to the spells, I used to cheese Baldurs gate 1 and 2 where you would cast a tonne of AOE spells at the edge of the screen which wouldn't aggro, yet still do damage to whatever you were going to fight. Overall it's a true love letter to the infinity engine games in 2015, that is what I wanted so they have succeeded imho.

I'm about four hours in, and have pretty much decided to wait for the patch at this point, after losing all my passives via the double-click equip bug. I'll probably restart then.

It's a little bit pathetic, how much I desperately want to play this game. I've been seeing those good reviews too, and for all that it may have a couple of problems, it seems like the kind of game that would be a massive timesink for me, which is just what I've been craving for a while. Something that feels oldschool without actually being a game I've already played and beaten half a dozen times years ago.

Never played the original Infinity Engine games, but I am hopelessly addicted to PoE. I've already sunk 30 hours into the game and I am still in Act I (spents lot of time sidequesting in Defiance Bay and doing the tough Od Nua dungeons).

The tactical fights are so much more satisfying than Dragon Age.

Once they fix some of the minor bugs, this will be my favorite RPG since FF7.