On Wednesday evening I had the fortune of being able to attend the world premiere of Season 5 of Game of Thrones. The event was held at the Tower of London, which was surrounded by bonfires and had dragons projected onto its walls for the occasion. 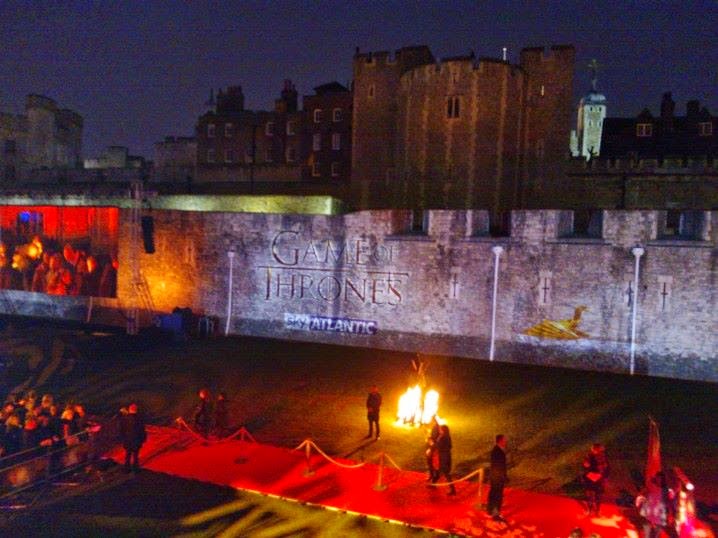 It was a pretty cold evening, but it was fun. After the screening there was an after-party with the requisite amount of Iron Throne-sitting fans and journalists trying to get pics of the stars. Fun stuff.

Still, the main event was the episode itself. HBO aired The Wars to Come, the first episode of the season. In traditional fashion for the series this was a catching-up episode which recapped where the characters were from last season and set up storylines and elements for the season to come. It certainly wasn't a quiet episode though, with one major character (not dead in the books yet) biting it, some dragon action, some throats cut and a metric ton of nudity. However, this time out the nudity was almost entirely restricted on male characters. There's also a sexposition scene (this time focusing on the geography of Dorne, rather weirdly) that is nearly the inverse of the much-ridiculed Season 1 scene from Littlefinger's brothel. I guess the writers finally got the memos the fanbase has been sending in for the past few years. There was even one scene which I suspect was a homage to the Austin Powers movies.

Season 5 starts off pretty confidently, with some huge set pieces, ambitious effects and some excellent-played dramatic exchanges. Some minor characters last seen in Season 2 show up again, which was a relief as they were needed for the stories getting going here, and there was some reasonable integration of new material with stuff from the book. The episode felt off in a couple of ways: one character should clearly have been present but the actor was unavailable, so there's some script fudging to try to work around that. Some other characters have been renamed from their book counterparts for no immediately discernible reason and there's already evidence that A Feast for Crows and A Dance with Dragons are going to be streamlined - possibly quite ruthlessly - to fit most of them into this season.

Overall, this was good stuff and hints that this may be the strongest season yet...but book purists are definitely going to have a rough time of it.
Posted by Adam Whitehead at 18:17

but book purists are definitely going to have a rough time of it.

Or... book purists get to be surprised along with the non-readers

So, speaking as a book purist, is this where I should get off the train? I'm seriously worried about getting the books spoiled by the TV-series, and your comment about one character not yet dead in the books dying in the series doesn't sound reassuring. Or am I exaggerating? Would you consider it a major spoiler, and what do you think about the rest of the season?

but book purists are definitely going to have a rough time of it.

Have at it, I say. Book 4 and 5 both needed some serious trimming. HBO will become the editor Martin should have always had.

This is truly a weird situation we're heading into here, in regards to the ASOIAF vs "Game of Thrones" thing.

On the one hand, GRRM says that "the show is the show and the books are the books" and on the other he insists that the best adaptations are the ones that stick closest to the source. (Somebody's going to end up disappointed either way.)

Since the show is not following the books any more, I'll be treating the series as fan fic for now. The difference is, of course, that I can be spoiled by this particular fanfic... So I may end up boycotting it.

I for one am thrilled they're streamlining AFFC and ADWD. They need it.

No, they really don't. As weird as it seems, nothing in Feast/Dance was filler.

AFFC/ADWD were 80% filler. I trust D&D to be as ruthless about it as Anne Groell should've been.

nothing in Feast/Dance was filler

I actually think that's very arguable and far more subjective than you're making it out to be.

I also think you can surely see some validity to the argument that even if there's no filler in Feast/Dance, a lot of the material in Feast/Dance would not make for good or entertaining television for 90% of the TV show's fanbase (both book readers and Unsullied alike) if strictly adapted from the page.

Did Ian Gelder (Kevan Lannister) make an appearance? Would be strange to have him not in King's Landing...