A horrendous error of judgement sees Miles Vorkosigan summoned back to Barrayar to face disciplinary measures from his superior, head of Imperial Security Simon Illyan. As Miles contemplates a future outside of the military, he becomes aware of a growing crisis in ImpSec. Things are going wrong and the cause may be to horrible to contemplate... 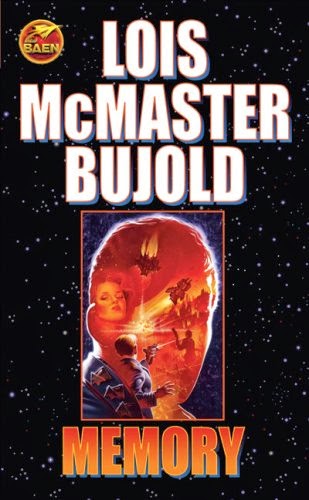 Memory is, chronologically, the tenth out of fourteen books in The Vorkosigan Saga and marks an important turning point in the series. For the previous eight volumes Miles Vorkosigan as been masquerading as Admiral Naismith of the Dendarii Free Mercenaries, carrying out missions for the Barrayan military with total deniability. In Memory that abruptly comes to an end after Miles - suffering the after-effects of his death, cryo-freeze and revival in Mirror Dance - inadvertently slices the legs off a fellow agent he is supposed to be rescuing and then covers it up. The result is the most game-changing novel in the series. Such long-running series tend to do well out of stasis, maintaining the status quo and bringing readers back each time to enjoy the same cast of characters and the same format. Whisking that away can be creatively liberating for the author, but dangerous if the change does not go down well with fans.

In this case the change is well-judged, although it takes a while to execute. At a bit less than 500 pages Memory joins Mirror Dance as one of the longest novels in the series, but it's also a lot less active a book than its forebear. Mirror Dance had multiple POV characters, clandestine infiltrations, full-scale combat missions and a huge amount of character development packed into its pages. Memory, fitting its title, is more relaxed and reflective a novel. It gives Miles a chance to dwell on everything that's happened to him and what he is going to do with his life now his default position has been snatched away.

This reflective mode works well for a while, but it starts to bog down the book. As amusing as seeing Miles tackling getting a pet cat, hiring a new cook or going fishing is, it goes on for a bit too long. When the mystery kicks in and Miles is granted extraordinary powers by the Emperor to sort things out, it's a relief and soon the mystery is unfolding nicely. However, the longueurs at the start of the book lead to the investigation and resolution taking place quite rapidly and a little too neatly. There also isn't much personal jeopardy for Miles. This may be the point, as the book is more about Miles's growth and maturing as a character, but there is the feeling that this story could have been told a little more effectively as a novella. That said, it does bring about some dramatic changes in the set-up of the series and is among the best-written books in the series.

Memory (****) opens slow but finishes strong and succeeds in its task of resetting the series and giving Miles a new job to do. It is available now in the UK and USA.
Posted by Adam Whitehead at 12:42