Sir Terry Pratchett, one of the most well-known and talented authors in the world, has passed away at the age of 66. 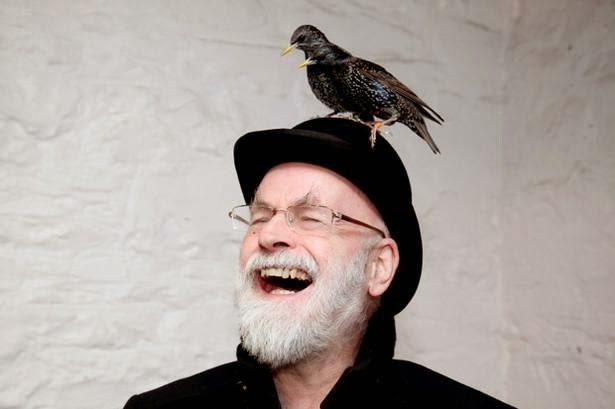 Pratchett published his first novel, The Carpet People, in 1971. This was followed by two adult SF novels (both with somewhat comic/absurdist undertones): The Dark Side of the Sun in 1976 and Strata in 1981. The latter, mildly riffing on Larry Niven's Ringworld books, was set on a mysterious flat planet floating in space. Intrigued by the idea, Pratchett recast the flat planet as the setting for an epic fantasy satire riffing off Tolkien, Dungeons and Dragons, Fritz Leiber's Lankhmar books and Robert E. Howard. The Colour of Magic was published in 1983 and rapidly gained popularity, outselling his earlier books several times over. He released an eagerly-awaited sequel, The Light Fantastic in 1985. Starting in 1987 he began writing two novels a year, most of them set on the so-called Discworld. The 40th book in the series, Raising Steam, was published in 2013. Pratchett had just completed the 41st book in the series, The Shepherd's Crown, when he passed away. It will be published this autumn.

Thank you Terry Pratchett, for the belly laughs, the warm heart, the enquiring mind and the deep, deep humanity. You made the world better.
— Gollancz (@Gollancz) March 12, 2015


As well as the Discworld series, Pratchett wrote numerous books for younger readers, including The Bromeliad, The Johnny Maxwell Trilogy, Nation and Dodger. He also co-wrote the classic fantasy novel Good Omens with Neil Gaiman (who speaks on his passing here), and recently completed the four-volume Long Earth SF series with Stephen Baxter. He also worked on numerous works of non-fiction, including The Science of Discworld series. His final count was 57 novels, 9 significant works of non-fiction, 2 collections (one of fiction, one of non-fiction), 2 picture books for children and a huge number of further tie-in books and editions.

Six of the Discworld novels have been adapted for television (two in animation), whilst The Bromeliad was adapted as the stop-motion animated TV series Truckers in the 1990s. Two of the Johnny Maxwell books have also been adapted by the BBC. Several novels had been optioned by Hollywood, but Pratchett later bought back the rights to prevent inferior adaptations being made. A TV series based on the City Watch Discworld novels had been in development for several years at the time of Pratchett's passing, along with a film version of Good Omens.

He was my friend for thirty years and a month. I miss him. Donate to Alzheimer's research and make it so things like this don't happen.
— Neil Gaiman (@neilhimself) March 12, 2015


Terry Pratchett was also a noted video gamer, citing Tomb Raider, Half-Life 2 and Thief as among his favourite games. His daughter Rihanna later became lead writer on the recent Tomb Raider reboot games (among others).

In December 2007 Pratchett announced that he was suffering from early-onset Alzheimer's. He documented his battle with the disease publicly, through numerous interviews, articles and a two-part television documentary, Living with Alzheimer's. Pratchett's concern about losing his faculties led to becoming a campaigner on behalf of the assisted suicide movement, and in 2011 he presented a new documentary called Choosing to Die which publicised the issue. Despite his disease, Pratchett continued writing with the help of his assistant and dictation software. Remarkably, he wrote or co-wrote a further nine novels after his diagnosis.

Pratchett's heroes were human. His villains were the monsters too scared to be human. A lot to learn from that.
— Damien Walter (@damiengwalter) March 12, 2015


According to his publisher, Pratchett passed away at home from complications related to his Alzheimer's, surrounded by his family and pets. His daughter Rihanna tweeted the following:

AT LAST, SIR TERRY, WE MUST WALK TOGETHER.

Terry took Death's arm and followed him through the doors and on to the black desert under the endles night.

Sir Terry Pratchett sold well over 85 million books in 33 languages and was the winner of multiple awards, including the Andre Norton, Locus and Carnegie. He received nine honourary doctorates and was made an OBE in 1998 for "services to literature" (he later joked this service was in recognition of not writing any). He was knighted in 2009 for his charity work and contribution to raising awareness of Alzheimer's.

The world of science fiction and fantasy is a much, much poorer place now, but Sir Terry leaves behind a formidable body of work that will be enjoyed by millions for generations to come.
Posted by Adam Whitehead at 17:11

RIP Sir Terry Pratchett. Long will you shine in my heart!

We now live in a darker world.

He teached me how to think more clearly, gave me the desire to be less stupid. How can you beat that kind of influence?