British actor James Frain has joined the cast of Star Trek: Discovery as Ambassador Sarek, Spock's father. The role of Sarek was previously played by Mark Lenard in The Original Series, The Animated Series, The Next Generation and four of the movies, whilst Ben Cross played the role in the 2009 movie Star Trek. 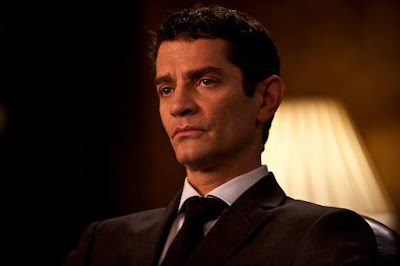 Frain has become a familiar face in genre television, having played Thomas Cromwell in The Tudors, Franklin Mott in True Blood, Azrael on Gotham and Eric Renard on Grimm. He currently plays the recurring role of assassin Ferdinand on Orphan Black, which returns for its final season in April. His past credits include Sleepy Hollow, The Tunnel, True Detective, Invasion, The Mentalist, Fringe and The White Queen.

The decision to cast Frain as Sarek is interesting for several reasons. Discovery, which is set about ten years before The Original Series, had previously been billed as more of a stand-alone story which would explore a conflict mentioned in the original series but not expanded upon, and the prospect for crossovers with The Original Series seemed unlikely. It's also interesting that the writers have chosen to recast the role rather than use Ben Cross again. Discovery is set in the original "Prime" timeline rather than the "Abramsverse" (or "Kelvin timeline") of the new movies, so it might be that this was a deliberate decision not to confuse the two franchises, opening the confusing possibility that we may get cameos by Kirk, Spock etc later on with yet more recast actors. Also, since Paramount own the movie rights to Star Trek and CBS the TV rights, there may be legal constraints on using the same actors in both projects.

After many delays, Star Trek: Discovery starts filming next week in Toronto. It will debut on CBS in May. Sonequa Martin-Grene stars as Lt. Commander "Number One" Rainsford, with Doug Jones as Lt. Saru and Anthony Rapp as Lt. Stamets, all crewmembers on the USS Discovery.
Posted by Adam Whitehead at 18:35

It's been delayed again. 😒