Your conquest of the underworld continues. Your next target is the Kingdom of Harmonia, but King Reginald has created a magical force to repel dungeon keepers. Dissipating this force requires forging an alliance with the redoubtable Horned Reaper and seizing the twenty Portal Gems from their guardians.

Dungeon Keeper II was released in 1999 and was one of the very last games released by Bullfrog, one of the greatest and most innovative video game developers of all time. It was a straightforward, iterative sequel to their 1997 hit Dungeon Keeper, retaining most of the core gameplay, adding new features and including a superior interface and better graphics.

As with the original game, you start with a group of imps, your dungeon heart (which has to be protected at all costs) and not a lot else. Early parts of each level are spent excavating new rooms and mining gold to afford stuff. By building different rooms and claiming portals you can attract and recruit new creatures, train them up and send them into battle, or put them to work on various tasks. Warlocks, for example are great at researching new spells and room types, but are also very powerful if trained up correctly. Since creatures only gain experience for combat training (or actual battles), not working, you have to carefully manage your creatures and what they are up to.

The improvements over Dungeon Keeper are legion. The graphics are vastly superior, using a full 3D engine which is vastly more detailed and attractive than the original game. The original game is fine (once you know how to activate the high-res mode) but Dungeon Keeper II is a giant leap ahead and retains a detail and charm that still impresses today. The graphic design is also more varied, with immense lava levels changing things up, and different types of underground environments and styles to make things more varied. The interface is also better, allowing you to drag-select areas to tunnel out (a vast improvement on the original) and giving you more feedback and precise control of individual room functions. On the downside, the combat feedback panel is less detailed and responsive than the original, making it harder to lend fine amounts of aid (such as healing) in battles. 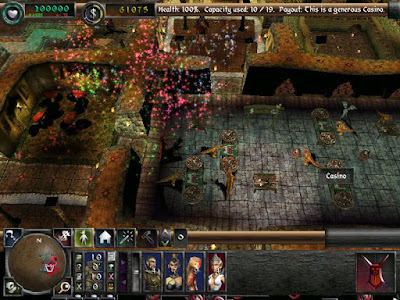 There's also a little more busywork in the new rooms. Training rooms can now only train creatures up to Level 4. To train them higher, you need to put them into Fighting Pits. This is hilarious - especially as creatures scurry over to cheer on their favourite - but requires far too much micromanagement to be really viable for training up large numbers of creatures at once. Still, it is entertaining. Some of the other new rooms are also clever, like the Casino which allows you to fleece your wages back from your creatures on low-income levels.

There's more of a storyline linking different levels and some optional missions and side-quests. There's also some amusing animated sequences linking each level.

Dungeon Keeper II (*****) doesn't really put a foot wrong. It's a slightly easier game than Dungeon Keeper (and certainly a lot easier than the original game's insane expansion, Deeper Dungeons) but it's far from easy. It's fun, still feels fresh eighteen years after release and is a deeply compelling game that will keep you playing for hours. It's available now on PC from GoG.
Posted by Adam Whitehead at 23:29