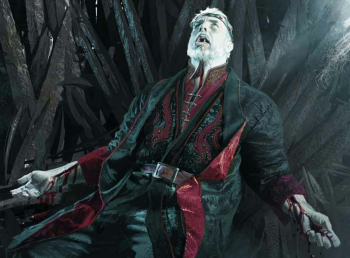 Maegor the Cruel, by Michael Komarck

Speculation is rife over Martin's story. By far the most likely prospect is The Sons of the Dragon. This is part of Martin's colossal (novel-sized) history of the Targaryen Dynasty, Fire and Blood, which was supposed to be his contribution to The World of Ice and Fire but grew out of control. This would be the third such extract from this material, following The Princess and the Queen (published in Dangerous Women) and The Rogue Prince (published in Rogues).

The Sons of the Dragon is the detailed story of the two sons of Aegon the Conqueror, Aenys and Maegor, half-brothers who were both fated to become kings. This narrative was completed several years ago and Martin has already read extracts from it at conventions, making it a shoo-in for the role. The story also revolves a lot around the Targaryen Valyrian steel sword, Blackfyre, which fits the title of the novella.

However, Westeros.org has also postulated that a new Dunk and Egg novella could be a possibility. This is surprising. George started writing the fourth Dunk and Egg novella, under the working title The She-Wolves, back in 2009 before The Mystery Knight was even published but put it on hold until The Winds of Winter was completed. Martin also seems to have decided to reconsider the project at some point, suggesting that another story called The Village Hero might come first, but again not until The Winds of Winter was completed.

Some may take this as a possibility that The Winds of Winter is nearing completion and Martin has finished one of these two stories as his time frees up, but that may be optimistic. Of course, Martin could have changed his mind (especially if he had a burst of inspiration for the story), but I think The Sons of the Dragon or another Fire and Blood extract is much more likely.

We should have more information soon.
Posted by Adam Whitehead at 22:42

Email ThisBlogThis!Share to TwitterShare to FacebookShare to Pinterest
Labels: a song of ice and fire, dunk and egg, fire and blood, gardner dozois, george r.r. martin, news, the sons of the dragon, the winds of winter

I think a lot of fans will read this and go, "Oh great! Another story from Mr. Martin that is NOT The Winds of Winter!"

@ Ghost - It saddens me to have to agree with your sentiment... Unfortunately, the negative side of GRRM's fandom has become more and more prominent as the ever-increasing gap between ADwD and TWoW grows. I for one will be happy to read anything Martin puts out this year, be it previously completed material or something new that has increased the wait for TWoW - especially so if it is in fact a new D&E novella!