XCOM 2 to get revamped strategic layer

Firaxis have announced that their strategy game XCOM 2 is to get a revamped strategic layer courtesy of modders. The officially-sanctioned and authorised Long War 2 mod will allow players to take direct command of all the rebel cells on Earth, organising military strikes and recruiting new personnel directly. 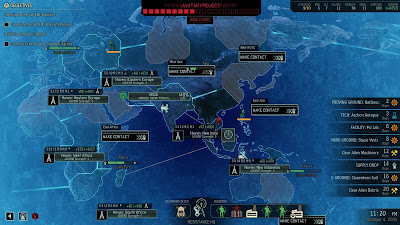 This will make for a much more strategically involving game and makes contacting new rebel cells far more important than it was previously. It also means that everyone is involved in the fight against alien occupation rather than just your single group on board the Avenger. The mod will also introduce the Technical, a new soldier class who specialises in rocket launchers and flamethrowers, and Coilguns, a new weapons class that fits between the Mag Weapon and Beam Weapon layers. The mod will be released in the next few months on PC.

Based on the cliffhanger ending to XCOM 2, it is likely that we will see an XCOM 3 around 2019. Meanwhile, the original creator of the X-COM franchise, Julian Gollop, is developing a similar strategy game called Phoenix Point for release in 2018.
Posted by Adam Whitehead at 13:32