WEREWOLF: THE APOCALYPSE game in development

A couple of years back Paradox Entertainment bought White Wolf, the company behind the World of Darkness, a horror setting for a family of roleplaying games, the best-known of which is Vampire: The Masquerade. It's now been announced that a new computer roleplaying game in the setting is in development, based on Vampire's sister game Werewolf: The Apocalypse. 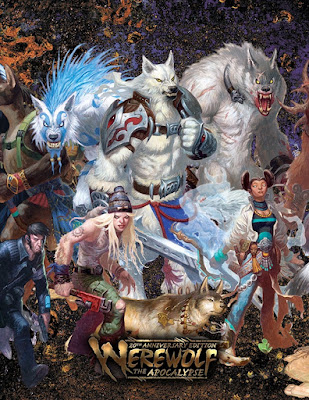 The new game, curiously, is not being released by Paradox. It's instead being developed by Cyanide, the French studio behind Blood Bowl and the so-so 2012 Game of Thrones RPG, and being released by Focus Interactive. This makes me wonder if the development deal pre-dates White Wolf's acquisition, as there doesn't seem much logic to them doing this and not Paradox themselves.

Hopefully the new game will be good, although Cyanide's track record has been spotty. What gamers have been hoping for is a new Vampire game, especially given Paradox's alliance with Obsidian, where some of the developers of the well-received 2004 RPG Vampire: The Masquerade - Bloodlines are now working. Time will tell whether that intriguing possibility comes to light.
Posted by Adam Whitehead at 17:09

There was an attempt at a Werewolf game once before, way back in the late 90s. It used some flavour of the Unreal engine. Wikipedia says that the developers, DreamForge, went bankrupt and the game was cancelled.

However, I've watched a good bit of Blood Bowl on YT. It's pretty solid, and mostly a good adaptation of the tabletop game. I'm cautiously optimistic.