The classic fantasy novel Good Omens, co-written by Neil Gaiman and the late Sir Terry Pratchett, is being brought to television as a co-production between the BBC and Amazon Studios, under the supervision of Narrativia, the production company set up by Pratchett before his death. 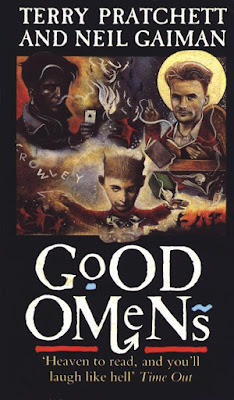 Gaiman will write the series and serve as executive produce and showrunner. Caroline Skinner and Chris Sussman will produce for the BBC and Rob Wilkins and Rod Brown for Narrativa. The series will consist of six hour-long episodes and will debut on the BBC and Amazon Prime in 2018.

The novel, originally published in 1990, tells the story of the Apocalypse, with the forces of good and evil preparing for the final showdown with Earth caught in the middle. However, both angel Aziraphale and demon Crowley have gotten used to life on Earth and decide to join forces to halt the Apocalypse. This means tracking down the Antichrist, who has gone missing. Much confusion and hilarity results.
Posted by Adam Whitehead at 14:48