The Lothal rebels have been inducted into the Rebel Alliance by their handler Fulcrum, now revealed to be former Jedi padawan Ahsoka Tano. Both Tano and Kanan take an interest in the training of young Force-wielder Ezra Bridger, who continues to have his doubts about his future path. Meanwhile, Darth Vader arrives on Lothal to take direct charge of the hunt for the rebels and former clone troopers come out of hiding to join the fight...but it's unclear on what side. 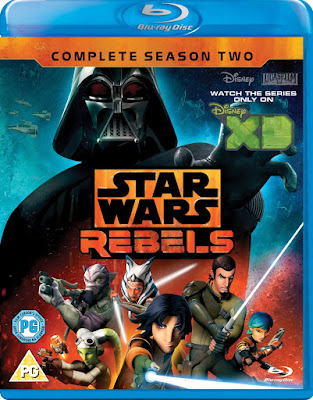 The first season of Star Wars: Rebels was a modest success, setting up the crew of the starship Ghost and sending them into battle against the Galactic Empire. Aimed at a marginally younger audience than the preceding animated show, The Clone Wars, Rebels' debut season featured plenty of knockabout adventures and some great space battles. At the end of the first season, however, the series took a slightly darker turn with a number of supporting characters massacred and the stakes being raised.

The second season continues in this vein. The opening episodes take no prisoners either, killing off another major supporting character and setting our characters up against Vader (who, in full Rogue One mode, makes mincemeat of them and their fleet). As the season continues, the rebels retreat from Lothal, undertaking other missions further afield (but with occasional visits home), but Ahsoka becomes increasingly intrigued by Vader and sets out to find who he really is...which, of course, we know is a really bad idea.

The second season of Rebels does several things. It's a darker, more ruthless season within certain bounds (this is still a kids show). It has incredible visual design and some really memorable moments, such as Kanan, disguised as a stormtrooper, going into battle with a lightsabre (confusing everyone) and a nerve-shreddingly tense game of cat-and-mouse between an Old Republic walker and three AT-ATs in a sandstorm. The show also gets more of a sense of continuity, with characters and storylines recurring from The Clone Wars, helping to address some of the loose ends left behind by that show's abrupt cancellation. Although welcome for Clone Wars fans, it is problematic for those who haven't seen that series: Darth Maul showing up is extremely random for those who hadn't seen his (somewhat implausible) resurrection on the older series. Some people may argue that Rebels, supposedly a stand-alone show, has been hijacked a bit by Clone Wars storylines in Season 2 to the detriment of its own characters.

However, I don't really buy that. All of the characters get their moment in the sun, such as an Enemy Mine-riffing episode with Zeb and Callus working together to escape an ice moon and a strong storyline for Sabine as she explores her Mandalorian heritage. There's also a frankly brilliant story featuring Chopper (the Ghost's psychotic-but-loyal astromech droid) as he winds up on an imperial starship, joins forces with the ship's officious manifest droid and kills a whole bunch of bad guys. In one of the best episodes of the season we also get some much-needed development for Hera as she test-drives the prototype B-wing (later seen - all too briefly - in Return of the Jedi).

But underlying the whole season is the sense of a ticking clock as Ashsoka closes in on Vader's true identity. There's a paradox hidden in Rebels' premise, namely that we know that Luke is the only Jedi to work with the Rebel Alliance in the films, so something has to happen to Ahsoka, Kanan and Ezra before the timeframe of the movies is reached, and that clock is ticking. Events in the second season culminate in a showdown between Ahsoka and Vader in a Sith temple, and a brutal and bruising lightsabre fight with an epic ending which leaves many storylines ripe for exploration in the third season.

The first season of Star Wars: Rebels was good. The second season (****½) ups that to excellent, with few weak moments and some much-improved visuals, writing and characterisation. It also lays pipe for Rogue One, with the starships the Ghost crew steal in one episode being used in that movie to bring down a Star Destroyer. Overall, an excellent slice of pulp SF fun. It is available now in the UK (DVD, Blu-Ray) and USA (DVD, Blu-Ray).
Posted by Adam Whitehead at 21:22

You barely mentioned the delightful Leia cameo episode. They really got her dialogue/characterization down pretty well - not just "Leia for the sake of having her pop on screen".

I had a bit of a problem with 15 year-old Leia looking all grown-up and already obviously leading Rebel missions.