MISTBORN movie gets a writer

DMG Entertainment has hired scriptwriter F. Scott Frazier to adapt Brandon Sanderson's novel The Final Empire as a film. This is the first novel in the first Mistborn trilogy (which so far extends to a completed trilogy and an almost-completed quartet, with two more trilogies planned) and part of DMG's ambitious plan to adapt most of Brandon Sanderson's Cosmere universe to the screen as a Marvel-style shared universe. 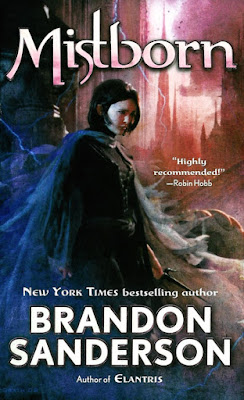 The Final Empire is the second Sanderson film that DMG is developing. They are in a more advanced stage with a movie version of The Way of Kings, the first Stormlight Archive novel, with Patrick Melton and Marcus Dunstan already deep in the writing of a first draft for that film.
Posted by Adam Whitehead at 13:45

Can't see this as a successful film. That ending of the third novel? That it all was actually a jokey secret origin story for God the Almighty? LOL - Like that will go over well with audiences! Everyone dies and only God lives on! No, fricking way. It's going to get booed and hissed at. It's ridiculous. It's on par with sparkle vampires.

I think you misunderstood the ending. Sazed ascended to become Harmony, the god of Scadrial (the planet where Mistborn is set). He has nothing whatsoever to do with Earth, Earth religions, or any deities worshipped thereby; Sanderson has repeatedly and emphatically confirmed that no version of Earth exists in the Cosmere. Harmony isn't even the big-G God of his own universe, as there are a number of others out there (though he's probably the most powerful, since he's got two Shards instead of one). But saying that Mistborn is a "jokey secret origin story for God the Almighty" just isn't true.