The first featurette for Starz's new series Camelot has been unveiled.

(note: Starz have objected to any of their foreign partners' audiences actually getting a chance to watch the trailer, so the above may vanish at any time; perhaps they need to learn PR lessons from HBO?)

Camelot is a new take on the Arthurian legend, starring Jamie Campbell Bower (fresh from the Twilight and Harry Potter movies, as well as the new version of The Prisoner and the unaired pilot of Game of Thrones) as Arthur, Joseph Fiennes as Merlin, Eva Green as Morgana, Tamsin Egerton as Guinevere and Claire Forlani as Igraine, whilst James Purefoy (the excellent Mark Antony from Rome) has a guest stint in two episodes. The 10-episode first season will start airing on 1 April 2011 in the USA, and will apparently come to Channel 4 in the UK later on.

Camelot appears to be yet another 'young' take on the legend, casting Arthur as a very young man (in fact, he's a clear half-decade younger than the Arthur in the family-friendly BBC series Merlin) and Merlin as a forty-something. It also seems to be following the Sword in the Stone angle, with Arthur having been raised as a commoner before discovering his true heritage. The casting is very impressive, with Fiennes, Green and Forlani noted for quite a few big-screen roles (though arguably none are A-list). Behind the scenes, the chief showrunner and writer is Chris Chibnall, noted for some of the worst episodes of the new Doctor Who and Torchwood, which is less encouraging (though he did write two solid episodes of Life on Mars as well). 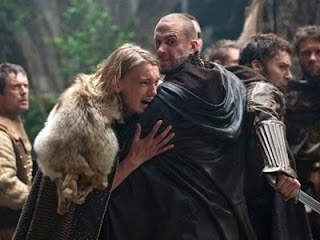 Given this is a Starz show (from the makers of Spartacus: Blood and Sand), it's likely it'll be a fairly adult show, though probably not as blood-drenched as Spartacus. The trailer is full of PR buzz-words, but the costumes and production design look impressive. Chibnall as head writer is not the best news ever, but perhaps this show could finally allow him to write something excellent, and it's certainly somewhat ridiculous that we haven't had a 100% successful live-action depiction of the Arthurian legend (John Boorman's Excalibur had potential but was hamstrung by having to pack everything into two hours). However, skewing revisionistly young with this take on the project seems redundant, given that Merlin is already thoroughly exploring that angle.

This looks promising, but I do wish they'd bought the rights to Bernard Cornwell's Warlord Chronicles and done that for a satisfyingly 'different' and 'dark' take on the legend.
Posted by Adam Whitehead at 18:39

Seconded the recommendation for The Warlord Chronicals. By far the best, and most "believable" Arthurian tale I've ever come across.

All BBC clips and trailers are not available in Australia so I have to turn to You Tube and hope someone has put them up there. So means of promoting shows is non-existent, which kind of defeats the purpose. - Ian

Well I think it has chances of not being as incredibly childish and daft as the BBC Merlin series. It looks better and more aduklt. I'm sure there'll be plenty I will find fault with myself, but I am glad to get to see an adult tv show on Arthurian legend. It's clearly revisionist again, which I actually find a shame, but still, promising.

I haven't been able to find any mention of whether Camelot has been picked up by a UK broadcaster yet so maybe that's why they are being coy but i can't see how letting everybody see the trailer wouldn't help.
As for Arthur being young, I'm not so sure that he is. Based on the casting of the show I'd hazard it's going to bear a loose resemblance to "the witch in the wood" part of T.H White's "the once and future king". Arthur was still just a young man in that and was not yet king, which seems to be the case with the show as well.

I recall something about Channel 4 having a good deal in place with Starz (they also showed PILLARS OF THE EARTH after Starz had done so) and this might be part of it, but I can't remember where that came up.

I noticed that Sky atlantic has Spartacus, so it could turn out to be a bidding war between Channel 4 and sky and given what happened to Lost and True Blood, I'd bet on it becoming a Sky show.