I am currently on a brief break from SFF to reread Harrison E. Salisbury's classic book about the Siege of Leningrad (St. Petersburg), The Nine Hundred Days. Whilst a full review will follow (eventually; this book is 600 pages of tiny type) one episode mentioned in the book is almost completely unknown in the West and seemed worthy of its own article: the so-called 'Russian Dunkirk'. This event took place in August 1941, but the seeds of it were sown the previous year. 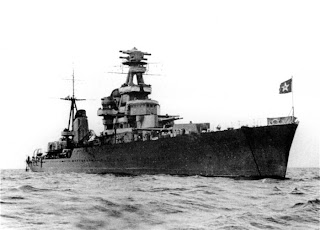 The cruiser Kirov, commanding the Tallinn evacuation.
The USSR, flush from its (costly) victory over Finland in the Winter War, occupied the three Baltic States of Estonia, Latvia and Lithuania in June 1940. Combined with the pushing back of the Finnish borders from the Karelian isthmus in the north, this gave Leningrad a protective 'shield' which would safeguard it from immediate attack should war break out. Formerly the city had only been 20 miles from the borders of nations sympathetic to Nazi Germany (and any resident of Seoul will tell you that living 20 miles from a hostile nation can be somewhat worrying).

The problem was that the 'shield' was never fortified properly. The Soviet Baltic Fleet established new bases in Tallinn and Riga (the capitals of Estonia and Lativa respectively), but the building of fortifications and defences at the ports and on their landward sides proceeded at a slow pace, due to Stalin's fear that Hitler would seize on any military build-up in the area as a provocation. When the Germans invaded on 22 June 1941, both the Soviet armies and the fortifications in the area were totally unprepared to face them. Field Marshal Von Leeb's Army Group Nord pushed aside the Soviet defences with near-contemptuous ease and advanced into the Baltic States. Simultaneously, Finnish and German naval forces succeeded in laying hundreds of thousands of mines along the coast of the Baltic Sea and the Gulf of Finland, threatening to cut off the Baltic Fleet's forward elements in Riga.

The Baltic Fleet gave up Riga as being indefensible (the city fell nine days into the invasion) and pulled back to Tallinn. The natives of the Baltic States saw the Germans as liberators (they changed their minds when Hitler refused to allow the Baltic States to reconstitute themselves as independent states, even as ones allied to Germany) and many refused to support efforts by the Soviets to hold the territory or throw up defensive lines. As a result, it fell to the Fleet's own military police, sailors and marines, aided by the shattered remnants of Red Army groups in the area, to defend Tallinn. They managed to fortify Tallinn just enough to make it difficult for the Germans to take without a major offensive.

This act, combined with the stalwart defence of the River Luga to the south-west of Leningrad, probably saved Leningrad from being quickly overrun. Von Leeb had to split off significant forces to take Tallinn (otherwise he'd have been in danger of attack from 80,000 armed Soviets on his left flank; a proposal to do exactly this was rejected by the Soviet command) which made turning the Luga line even tougher. It took a month to dislodge the defenders from that line and to start penetrating Tallinn's suburbs in earnest.

Having held Tallinn against siege for three weeks, the Baltic Fleet pulled out on the night of 27-28 August. The Fleet had to navigate 200 miles and several large minefields, all within range of Finnish coastal batteries and Luftwaffe airbases, with both German U-boats and Finnish torpedo boats in the area. The Fleet not only had to evacuate its own personnel and Red Army troops (many of whom stayed behind to buy the Fleet more time, or were simply pinned down and unable to get to the ships) but also thousands of Soviet civilians, including journalists covering the conflict. All-told, 30,000 personnel escaped on 190 transport ships, protected only by a single Soviet cruiser of note, the Kirov, and a few smaller naval vessels.

The journey can only be described as nightmarish. The Kirov and several other naval ships acted as minesweepers and drew enemy fire (a German U-boat almost sank the Kirov, but an escort spotted the torpedo in the water and took the hit instead), but there were too many ships to protect, spread out over a huge area. The Luftwaffe had a field day, and between them and their naval and Finnish counterparts they sank over sixty of the transports and several of the naval warships. Of the 30,000 who embarked in Tallinn, only 18,000 made it off at Kronstadt (Leningrad's colossal naval bastion, located in the Gulf of Finland near the city) and Leningrad itself the following day.

It wasn't a totally unmitigated disaster - the Kirov's survival was an important bonus as the ship later took up station within Leningrad's river network as a mobile artillery platform and performed sterling work in the city's defence - but it was still a severe fiasco. The captain of at least one of the ships involved was shot for abandoning his post (in reality he'd been blasted into the sea by a shell that had destroyed the bridge and had to be picked up by another ship), whilst it was later revealed that the minefields had been concentrated along the coast; if the fleet had swung out wide into the deeper water, it wouldn't have suffered anywhere near as many casualties, though obviously this was not known at the time.

The near-total-ignorance in the West of not just this event but most of the Soviet-German conflict remains startling as the 70th anniversary of WWII continues to roll on. As we get to the 70th anniversary of Operation Barbarossa later this year, hopefully the sheer scale and significance of the Eastern Front will become better known and appreciated here. After all, if Hitler hadn't decided to abandon the offensive against Britain in favour of Barbarossa, Britain would have been (eventually) invaded and defeated quite easily.
Posted by Adam Whitehead at 10:22

I would imagine it is partly because, the USSR was an Ally of convenience and not an Ally of Culture like the British Empire/Europe/USA were...

A lot of people didn't like the USSR even then, and felt it wouldn't be a bad thing to let Russia and Germany pummel themselves into destruction..

We similarly gloss over the Sino-Japanese War as well. It's rarely ever adapted into films and almost never taught. I can only speculate but I think that has a similar cause as the USSR, because the Maoists wound up winning, we in the west stopped caring what had happened to them during the war.


Only my thoughts on the subject of course.. but this book seems like a good read and I'm going to have to try and find it.

The Cold War also played its part. The British/American contribution to the war was downplayed in Russia and vice versa, though not to the same extent (even the most tubthumpingly patriotic Western-written histories of WW2 can't deny the fact that the Russians eventually destroyed the bulk of the German armies).

Certainly Churchill was deeply suspicious of the USSR, but once the war was joined he did his bit to bring Stalin on board, although he loathed him; oddly Roosevelt seemed to quite like Stalin and trusted Stalin's word over Churchill's, rather unwisely in the case of the Russian occupation of Eastern Europe at the end of the war.

The Sino-Japanese War is even more undersold than the German-Russian one in the West. Probably for the reasons you describe, added to the fact it's monstrously complex, with the Maoists fighting multiple factions within China as well as the Japanese invaders. Most Western histories focus on the island-hopping Pacific War, but of course the overwhelming bulk of the actual Japanese military was tied down in China, and went most of the war without exchanging a shot with the Allies (until the Russian invasion right at the very end of the conflict).

At least Finland wasn't sympathetic to Nazi Germany until summer of 1940. Don't forget that Germany and the USSR were allies during the Winter War and Germany actively supported Russian war efforts (although Hitler and others Nazi leaders privately symphatised with Finns). The democratically elected Finnish leadership wasn't a big fan of national socialism or Hitler, although these were considered "lesser evil" compared to Stalin and the bolsheviks.

There were lots of propaganda in the official Soviet history books how Finland was a proto-fascist nation in the 1930's and a threat to Leningrad. This was invented as a justification for the Winter War. Finland and the USSR had actually signed a non-aggression pact in 1932:

"they changed their minds when Hitler refused to allow the Baltic States to reconstitute themselves as independent states, even as ones allied to Germany"

True. But still in 1944 Estonians considered the German occupation better than the Soviet one. I'm not sure about the other two Baltic states.

"Britain would have been (eventually) invaded and defeated quite easily."

Most post-war analyses of the German invasion plans indicate that if Sea Lion had been launched, the British would have won quite easily.

Even if the RAF had been forced out of Kent, the RN would have done sunk most of the German shipping - the German Navy was under repair after Norway, and the Luftwaffe's anti-shipping record was poor at the time.

A wargame run at Sandhurst (involving several of the generals who would have been in charge at the time) removed the RAF and RN, and the British Army still managed to stop the Wehrmacht.

The consensus appears to be that the Germans could have landed, but the first two waves would have been cut off and captured.

Not that this was obvious to the British at the time - most of the politicians and commanders expected the invasion.

Certainly Sealion in 1940-41 would have failed. However, with Germany not at war with Russia or the United States and able to concentrate all its forces against Britain, it likely would have been able to successfully invade Britain at some point, even if it was substantially later and they had to spend years bombing the UK and building specialist landing craft.

But as Hitler said, "I am a hero on the land but a coward on the water." He did not favour naval warfare and was more interested in land operations. He also seemed to have an odd desire to keep Britain and its empire intact as much as possible, seeing in Britain a natural Anglo-Saxon ally that Germany was at odds with unnecessarily, hence his rather generous terms when he tried to make peace after the fall of France.

The German Dunkirk is pretty much ignored as well. From January to May 1945 1.2 million were evacuated from the Baltic states and East Prussia.

Thank you for this review.

Frankly speaking, I'm not sure that this fact is well known even in Russia.

I second Jussi's (Finnish I presume) opinion. Let me add some Polish flavour here. I often see that the fact that Stalin and Hitler used to be allies before they've become enemies is forgotten at best and consciously omitted at worst. That alliance wasn't anything odd if you consider it followed the long-lived tradition of German-Russian alliances which can be traced back to the very foundations of both states as major European powers: Germany united under the Prussian rule from a mosaic of German minors and the Russian Empire born out of Muscovy. Both the Prussian and Russian might were born over the carcass and at the expense of Polish-Lithuanian Commonwealth and sustained existence of both of them as major European powers required that no as powerful state be reborn between them ever again. In my opinion you can see this natural tendency of Germans and Russians being reconstructed right now before your eyes. I tremble at the very thought of in what dire straits it can lead us again.