Battlestar Galactica: Blood and Chrome has made its first casting announcements. Luke Pasqualino, best-known for his role on the UK Skins in its third and fourth seasons, will be playing the young William Adama, a role previously played by Lorne Greene (in the original 1970s TV series), Edward James Olmos (in the revamp) and Nico Cortez (in flashbacks in the revamped series). 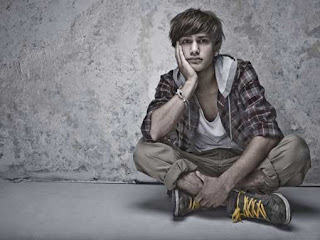 Questions remain why Nico Cortez simply did not return for the new series: presumably SyFy decided they wanted a fresh start. In addition, Blood and Chrome sounds like it might violate continuity (establishing as it does Adama as a Viper pilot two years before the war's end, whilst previously he only flew his first mission on the very last day of the war) anyway, so this is less of an issue for them.

Another actor announced was Ben Cotton, who's playing Coker, Adama's war-weary superior officer. BSG stalwarts Michael Taylor, Bradley Thompson and David Weddle are on-board on the creative side of things, with David Eick producing, but Ronald D. Moore seems to have moved on to other projects.
Posted by Adam Whitehead at 16:32

Let's just say I'm sceptical about this series... They didn't succeed with Caprica, so they're trying to something more similar to BSG. Copying earlier hits rarely works, especially when it was something this original and brilliant.

"establishing as it does Adama as a Viper pilot two years before the war's end, whilst previously he only flew his first mission on the very last day of the war"

That’s only said in the webisodes, neither version of “Razor” has the reference. If ignoring 2-3 1 minute shorts means we can get a couple of seasons of young Adama fighting cylons, I think that’s something every fan can live with :-)

I suppose the new guy has some looks, although Cortez was much more convincing as a younger Olmos.
Still, neither of them look anything like a real young Olmos: (thank the gourd!)

I would love to see another BSG series (prequel). I'd even like to see the original series continued in written form.