New WATCHMEN comics on their way

This summer, DC will commence an ambitious project, Before Watchmen. This umbrella title covers seven separate mini-series, each one focusing on a character from the iconic original graphic novel, for a total of 34 issues released weekly. 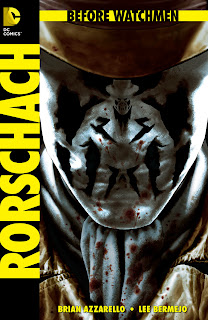 Each issue will also feature a two-page back-up strip called Curse of the Crimson Spectre, written by Len Wein with art by John Higgins.

Original series creator/writer Alan Moore is not supportive of the project in interview with the New York Times:

"...completely shameless...I tend to take this latest development as a kind of eager confirmation that they are still apparently dependent on ideas that I had 25 years ago...I don’t want money, what I want is for this not to happen."

"The original series of Watchmen is the complete story that Alan Moore and I wanted tell. However, I appreciate DC’s reasons for this initiative and the wish of the artists and writers involved to pay tribute to our work. May these new additions have the success they desire."

J. Michael Straczynski - yup, the Babylon 5 writer/creator - has a lengthy interview with Comic Book Resources here in which he discusses why he chose to take on the project.

In my view, this is an interesting idea but arguably an unnecessary one. The original Watchmen stands on its own two feet as a complete story with a beginning, middle and end. The idea of exploring the backstory in more detail is very enticing - the glimpses we get into the Minutemen's adventures are intriguing - but ultimately they can add little to the story as it originally stands. Regardless of Moore's approval or lack thereof - and Straczynski gives interesting reasons why that should or should not be an issue - there seems to be little to no storytelling reason to flesh out the universe in this way. I certainly hope to be proven wrong.

Before Watchmen kicks off in the summer with one new issue published per week, likely taking us through the end of this year.
Posted by Adam Whitehead at 20:52

Acclaimed comic writer Grant Morrison, who was rumored to work on the project, had this to say on the subject:

No, they asked me to do that, and I said, “Why would you want a sequel to Watchmen?” [Laughs] No, I mean, c’mon. Watchmen is actually perfect in its construction. I mean, not necessarily in other areas, obviously, but as a story it’s complete, it’s utterly circular, and there’s absolutely no need for anything else in it.


I very much agree.

Just in case anyone had any doubt that businesses in the entertainment field will do ANYTHING to turn a buck in this era of retreaded ideas ad infintum.

I've gotten to the point that the word 'prequels' automatically turns me off- no matter the property. But, on the Watchmen-

I was actually collecting comics way back when Watchmen came out and it was truly a unique experience- It didn't take long after reading the first issue to realize that we were witnessing comic history and the anticipation each month for the next issue was insane.

Call me a purist, but some art needs to stand on its own for all time- no prequels, no sequels- just the work as it is. I believe Watchmen is one such work.

After all- we know how those Star Wars prequels and Jaws sequels turned, don't we?

The thing is that none of the writing will ring true and all the new information cannot reflect what Alan Moore would have thought. There are enough creative writers and artists to come up with something original.

I can only imagine what neolithic man would have to say about this. "Ugh, this no be good."

Sure, this will probably be artistically awful - though commercially succesful, as all the people shouting about it now will be lining up to buy the stuff anyway, as usually happens.

But that's not the point.

If you don't think you'll like them, don't read them. Watchmen will not be affected in any way by the creation of new stories with the "same" characters. No one is proposing destroying all copies of the original and replacing them with a new version written by Madonna. Morrison says that Watchmen is perfect in construction. Well, it'll carry on being perfect.Some books should "stand on their own for all time" - they can do on your bookshelf. Besides, were the people who say this now saying the same thing when Ursula Le Guin wrote a sequel to the Aeneid? When Brian Friel wrote a sequel to two of Chekov's plays? When Updike wrote a prequel to Hamlet, or when Tom Stoppard wrote a play set in the wings of Hamlet? "Paradise Lost" is another example of a derivative work set within the same world as a work that, at the time, was far more succesful. "Wide Sargasso Sea" has a similar acclaim to "Watchmen", but is "only" a prequel to Jane Eyre. Most of Shakespeare and the whole of classical literature could likewise be lambasted as derivative, and as 'spoiling' the older work it was based on.

As for the question of whether there can be any narrative reason for these stories: of course there can be. First, a prequel can always cause a re-examination of the original work. Second, and most important, the fact that a book features a character called, say, "Ozymandias" does not mean it can't have a good plot. There's nothing about the prequel idea that means that these stories won't be good. If there is a narrative reason for each story, in its own right, then it shouldn't matter that in some literary classification of the universe another story, Watchmen, is "set after" these new stories. Each work should be judged on its own merits, for what it is. And I don't care about what Moore thinks about it, and don't see why anyone should. If he gets upset, that's a shame, but he hasn't staked out a kingdom in our language that he's the sovereign of. Frankly, I think modern attitudes toward copyright are TOO restrictive, not too permissive (and that's what that part of the argument is really about, even if it is mostly copyRIGHT only, and with no reference to legal enforcement).

Of course, the odds are these stories won't be good, because they probably wouldn't have been good whatever they were about, and because anything that makes it easier to sell a book makes it easier for the author to take it easy. But that pragmatic consideration is entirely different from the strange moral-ontological fury that the Internet seems to want to be seen to be expressing.