1912. Booker DeWitt, a war veteran and former Pinkerton agent, is recruited by a shadowy figure to undertake a dangerous mission: he must go to the city of Columbia and rescue a girl called Elizabeth. He must take her back to New York to clear his debts. Booker agrees, but finds his task is more complex than he could possibly imagine: Columbia is a city floating in the sky, held in place by quantum engines. Even worse, Booker's coming has been foretold by the city's messianic leader, the Prophet Zachary Comstock. DeWitt is the False Shepherd who is prophecised to kidnap Elizabeth and expose her to lies. As the entire city turns against him, Booker is forced into a dangerous alliance with an underground resistance movement if he is to save Elizabeth and discover the truth about the city...and himself. 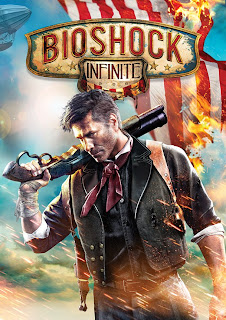 BioShock Infinite is the third game in the BioShock series, following on from BioShock and BioShock 2. However, it is a stand-alone game that does not require foreknowledge of the older two games to be enjoyed (though there are a few nods to those who have played the earlier titles).

In fact, it would be more accurate (not to mention appropriate) to say that there are in fact two BioShock Infinites. The first is a narrative and character-based game featuring a complicated storyline and an exploration of themes revolving around the American ideals of free speech, equality, liberty and responsibility. The narrative is recursive, using time loops and parallel universes to drive forwards the storyline and melds elements of hard SF, steampunk and revolutionary fiction together. The storyline is also highly focused on individual characters, including Booker DeWitt, Elizabeth (Booker's companion for a chunk of the game), the Lutece twins and the rarely-seen, often-heard ruler of Columbia, Zachary Comstock. The narrative is twisted and twisting, complicated (though mostly cohesive) but well-told and addressing issues that most games pretend simply don't exist, such as racism and prejudice, and doing so intelligently. In short, it's a bit of a triumph.


The second BioShock Infinite is the actual gameplay, wherein you blow away a truly vast number of adversaries with an exotic selection of advanced weapons and semi-magical powers. Enemies are defeated more quickly if you shoot them in the head (causing their skulls to explode) or use your powers to lift them into the air and then blast them over the edge of the city. BioShock Infinite is a startlingly violent game where your path through the excellent story is soaked knee-deep in blood.

There's a bit of a dissonance between the story and the gameplay. Ken Levine and his team have attempted here to create a complex and literate narrative, perhaps gaming's answer to Ulysses, except that Leopold Bloom didn't periodically wander out onto the streets of Dublin to mow down hordes of enemies with a crank-powered rotary chain cannon (literary critics are divided on whether this would have improved the book). This collision between gameplay and story is something that the original BioShock also suffered from, though in Infinite they do a much better job of trying to integrate the two together. For a start, combat is fast, fluid and fun, a far cry (no pun intended) from the often-stodgy shooting of the original game. There are a few similar problems, such as the fact it's bewilderingly easy to get stuck on the corners of buildings and platforms and the game seems highly reluctant to let you jump over anything (often resulting in your character bunny-hopping like a maniac to clear a two-foot step whilst multiple opponents are firing missiles at your head), but broadly speaking the combat - incongruous to the setting as it often feels - is pretty good. It's particularly good fun to take to the overhead sky rails to zip above enemies' heads, either shooting them from afar or jumping off to perform a melee takedown. Booker's different powers - Vigours - are varied and entertaining to use, and intelligent use of Vigours can mean the difference between a fight being a dull slog and an exhilarating demonstration of power. It's all cool, but it also feels rather distanced from the actual storyline and the quieter moments of exploration and dialogue. 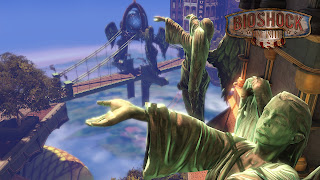 Much has been made of the game's environment and with good reason. The art direction is stunning. BioShock Infinite is hardly at the cutting edge of visuals (the Unreal 3 Engine is starting to show its age) but its colourful palette, World Trade Fair-inspired architecture, open spaces and blazing sunlight combine for a vivid gaming experience. The game may be shifting far fewer polygons than Crysis 3, but the ingenuity and originality of the design more than makes up for that. It's a game so striking that it's fun just to wander around and look at things. Unfortunately, this artistic excellence does not extend to character animations, which are often unconvincing and wooden. It's not Bethesda-bad, but it's certainly somewhat lacking compared to the game's strengths in other areas.

Much has also been made of your AI companion, Elizabeth, who accompanies you for roughly four-fifths of the game. Elizabeth doesn't fight, but she can help you explore areas and finding money, and also scavenges extra ammo, health and salt (which recharges your Vigours) for you mid-combat. She is also an accomplished lockpicker, and can use lockpicks to open sealed doors. Lockpicks are severely rationed for the first half or so of the game, forcing you to carefully explore each area before moving on, but later on become so commonplace that such care is no longer required. Elizabeth's voice acting is good but her animation is somewhat lacking. She also has disconcerting tendency to teleport around the map, as her pathfinding leaves something to be desired. Combined with her inability to fight, this makes her rather less impressive a companion character than Alyx Vance in the nine-year-old Half-Life 2, which seems rather poor going.

The game's biggest weakness is the same as with BioShock before it. Irrational Games (and Looking Glass, where its founders worked beforehand) started off with roleplaying games, most notably the System Shock series, which is the spiritual predecessor to the BioShock series. These games were roleplaying games with shooter elements, whilst the BioShock series are shooters with a few roleplaying elements grafted on. This is fine, except that the complicated story, more notable characters and even the fascinating environment feel like they've still been designed for a roleplaying game. The result is a game which hints at immense depth but it held back from fully exploring or embracing it by its shooter credentials.

As it stands, BioShock Infinite (****½) is a very strong shooter with an unusually deep story, complex characters and thematic elements that don't entirely gel with the game's genre. It's still a fascinating, fun and thought-provoking game, but one that does not fulfil its full potential due to genre limitations. However, it's still a remarkable game, with a genuinely intelligent and smart ending, one of the best endings a game has ever had. It is available now in the UK (PC, X-Box 360, PlayStation 3) and USA (PC, X-Box 360, PlayStation 3).
Posted by Adam Whitehead at 11:59

you should put this on readandfindout

Just a small error to clean up. Great review!