LucasArts, the game-making division of Lucasfilm, is being shut down by the company's new supreme overlords at Disney. 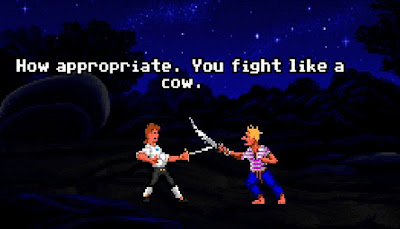 Disney is instead switching video game development of Lucasfilm properties (i.e. Star Wars) to external companies under a licencing model. The fate of 1313, a new Star Wars game internally developed by LucasArts and set between Episode III and IV, is unclear, although rumours have stated that the game has been on hold since late last year as Disney wants all new Star Wars games to focus on the time period of the new movies.

LucasArts was founded in 1982 and worked on some very early home video games before the release of its first big hit, Maniac Mansion, in 1987. That game introduced the SCUMM Engine, which put impressive graphics and a mouse-driven interface into the adventure genre, previously dominated by text inputs. Further games refined this system, such as the brilliant Zak McKraken and the Alien Mindbenders (1988) and Indiana Jones and the Last Crusade (1989), the latter of which may still be one of the very best movie tie-in games ever made. LucasArts adjusted their formula in 1990 with the quirky and enjoyable LOOM, which replaced the typical command system with a music-driven one. In 1990 LucasArts released arguably their best-known, non-Star Wars game with The Secret of Monkey Island, following that up a year later with the epic and superior Monkey Island 2: LeChuck's Revenge. Indiana Jones and the Fate of Atlantis was released in 1992, followed by Maniac Mansion 2: Day of the Tentacle and Sam and Max Hit the Road in 1993.

Following this point, the widespread adoption of 3D technology for games left LucasArts feeling that their adventure games looked outdated. The Curse of Monkey Island (1997) was their last adventure game using 2D animation, with both Grim Fandango (1999) and Escape from Monkey Island (2000) featuring 3D graphics. Though critical acclaim was still forthcoming (rather less for Escape), LucasArts wound up its adventure-producing division in 2003. Many of the people working there went on to found Telltale Games, who eventually ended up producing episodic new Sam and Max and Monkey Island games. Their most recent hit was The Walking Dead episodic game series.

Meanwhile, LucasArts branched into other areas of gaming. In 1993 they published X-Wing, a Star Wars-themed competitor to Chris Roberts's Wing Commander series of space combat games. The critically-acclaimed series eventually ended up comprising four core titles: X-Wing (1993), TIE Fighter (1994), X-Wing vs. TIE Fighter (1997) and X-Wing Alliance (1999). Disappointing sales for X-Wing Alliance - accompanying the wholesale collapse of the space combat simulator genre after a decade of success - saw the series cancelled at that point. LucasArts moved into console gaming, working with BioWare to produce the RPG Knights of the Old Republic in 2003 and with Obsidian on the ill-fated Knights of the Old Republic II in 2004. They also produced the action game Star Wars: Republic Commando in 2005.

Increasingly, post-2000 LucasArts was working more and more with external companies to produce their games, with LucasArts often only providing oversight. The most recent example of this is the highly troubled MMORPG The Old Republic, co-produced with BioWare and apparently the most expensive computer game of all time (with rumours abounding about how close the game has come to breaking even). It is likely that these elements also factored into Disney's decision to shut down the company.

Sad news for the once-great games development company which kick-started the careers of, amongst many others, Ron Gilbert and Tim Schafer.
Posted by Adam Whitehead at 17:59

Grim Fandango was an absolute favorite of mine!

Well, they haven't produced any good games in ages, so maybe it's not such bad news?

The Dig was always my favourite of the LucasArts classics. Such a great little puzzle game. :)