Ubisoft have confirmed the existence of Flashback, a HD remake of the 1992 Amiga game of the same name.

News of the game was leaked several months ago under the working title Flashback Origins. However, the Origins bit has been dropped. The game appears to be a mostly-faithful reimagining of the original game.

Flashback was at first glance a straightforward platform game, with the player guiding the protagonist, Conrad B. Hart, as he attempts to recover his missing memories and fend off an alien invasion of the Solar system. The game starts on Saturn's moon Titan, which has been terraformed, and later travels to Earth and to the alien homeworld. The game is notable because, as well as combat sequences, it also features RPG-like levels where Conrad has to interact with non-hostile characters and do jobs for them in order to progress. There were also an extensive number of cut-scenes, which was highly unusual at the time. The game was highly praised on release for both its more tactical combat (Conrad has grenades and a deployable forcefield as well as his gun to use) and is astonishing, rotoscoped animation. The rotoscoped animation drew parallels to both Prince of Persia and especially Another World, as the latter was released by the same publisher as Flashback (though developed by a different team). Flashback was more pulpy and action-packed than the slow, moody Another World and was considerably longer.

The game was ported to consoles and the PC following the initial Amiga release. It was followed in 1995 by Fade to Black, a full-3D, polygon-based sequel that more closely resembled (the later-released) Tomb Raider. It had a much more mixed reception than the original. 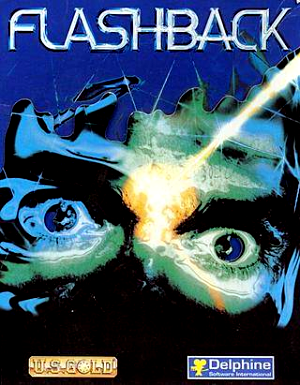 Even the original game's cover art was fairly iconic at the time.

The new version looks like it's kept the side-platforming action and excellent level design intact, as well as the different regions Conrad has to fight through. Even the cut-scenes look faithful to the original.

The game will be released later this year. So far only X-Box 360 and PlayStation 3 versions have been confirmed (almost certainly through X-Box Arcade and PlayStation Network rather than boxed copies), although I'll be surprised if this isn't also available on PC and, possibly later, mobile devices as well.
Posted by Adam Whitehead at 12:36