SyFy has announced that it is producing new mini-series based on the classic SF novels Childhood's End by Arthur C. Clarke and Ringworld by Larry Niven. 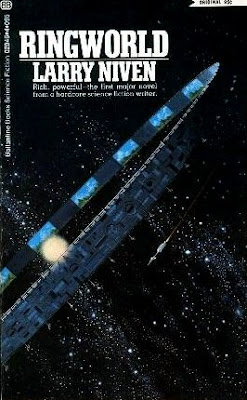 Ringworld is set eight centuries into the future and revolves around an expedition to a vast artificial ring in the space, so huge it extends completely around its star. It was an inspiration behind the titular structures of the Halo series of computer games (although, properly speaking, the Halo rings are much closer in size and function to one of Iain M. Bank's Culture Orbitals). The novel was published in 1970 and won the triple crown of the Hugo, Nebula and Locus awards. The novel has three sequels (The Ringworld Engineers, The Ringworld Throne and Ringworld's Children), so presumably if it's a big hit SyFy can turn this into an ongoing franchise. The four-hour mini-series is being produced by MGM TV in conjunction with Universal Cable Productions. Michael Perry (co-creator of The River and writer of Paranormal Activity 2) is helming the adaptation. 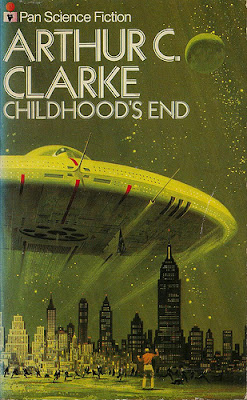 Childhood's End was originally published in 1953 and, alongside 2001: A Space Odyssey and Rendezvous with Rama, is one of Clarke's best-known novels. Its iconic opening, which huge alien ships arriving at Earth and plunging the major cities into shadow, was later echoed by both the V mini-series in 1983 and the movie Independence Day in 1996. It is noted as one of Clarke's most speculative novels, featuring paranormal elements and talkative aliens, rather unlike his later books which were driven much more by hard science and completely unknowable alien intelligences. This mini-series will be helmed by Michael DeLuca (a producer on Seven, Boogie Nights and The Social Network).

Whilst sounding promising, it's hard to forget the complete pig's ear that SyFy made of both the Earthsea and Riverworld books, and the channel's seeming difficulty in actually making SF in the last few years. Alongside the the Blake's 7 reboot, this indicates that SyFy is at least focusing on the right ideas. It remains to be seen if they can follow through with them.
Posted by Adam Whitehead at 09:42

SyFy needs to convince me that they are not going to cancel a show before I get invested in another one. I thought Caprica was a good idea that needed to pick up the pace. I loved Stargate Universe, which I thought was the best in the series, and BSG: Chrome could have been awesome.

I'm sure I have forgotten some, but my point is that SyFy can make good shows they just don't give them enough time to build a following.

What's up with SyFy lately? Have they suddenly remembered that science fiction is about more than sharks of unusual size?

SyFy (Lord, I still hate that re-branded name)probably has looked at the success of "Game of Thrones" and said, "Hmmmm...there is a large audience for fantasy, why can't we cash in on that for SF?"

The problem, of course, is their horrible execution and mind-blowingly bad shows/movies. I can't tell you how little on that channel interests me.

Well I'm looking forward to it but not gonna get my hopes up for a great show. I think they might have been better off going with Mote in God's Eye, it seems much more easily converted into TV and if they want expansion options if it goes down well CoDominium is pretty parallel to Known Space in terms of material. Mote's more action-laced then Ringworld too.