An invading army is laying waste to the lands of the Hundred. The reeves, the giant eagle-riding police force of the land, are unable to hold them back. In desperation they have struck up an alliance with an exiled outlander prince and his militia, but the enemy are led by corrupted Guardians, resurrected beings with the power to look into souls and strike people dead with a glance. The only hope of victory may lie with the uncorrupted 'pure' Guardians. But to achieve this, they may have to give up a terrible secret... 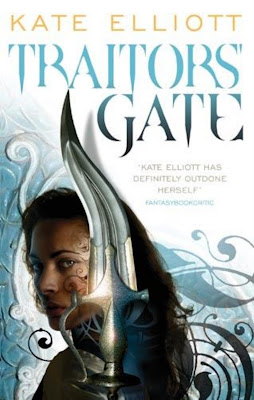 Traitors' Gate concludes the Crossroads trilogy by Kate Elliott, or rather it concludes the opening three-book arc of the series. Future books are planned picking up the story some generations further down the line. For now, however, it is a self-contained trilogy with no major cliffhangers or unresolved plot elements.

It's been five years since I read the first two volumes in the series, so I was initially a bit swamped as I caught up with what was going on. The core storyline is fairly straightforward, but the secret to the success of the trilogy is how Elliott layers in thematic elements to apparently trivial characterisation and how she addresses a wide range of different topics - from sexuality and female empowerment to commerce and religious freedom - within the confines of a more straightforward story. In fact, my biggest complaint about the trilogy as a whole is that it like it could have done with an additional book to help flesh out the world and cultures (a far cry from her prior Crown of Stars series which, whilst very good, could have probably done with at least a volume being shaved off its length).

The book and the trilogy as a whole also explores the concept of corruption and the ethics of the use of power. Elliott has little truck with evil magic or other examples of simplistic morality, instead citing that every person has within them the capacity for good or ill, the Guardians included, and she contrasts well the rigid thinking of the Qin (who prefer to see the world in absolutes rather than shades of grey) against those who are more open to a more complex view of the world. There's a good culture clash element which is not over-egged. There's also a feeling of melancholy to the story: the Hundred is an open-minded, tolerant land which has to become harder and more regimented to fight the invaders and in the process loses something of itself.

The worldbuilding is excellent - the Hundred is not another European medieval fantasyscape but an original creation drawing on many sources - and the characterisation is fairly strong. The pacing is a little off: for almost three-quarters of the length of the novel it honestly feels like there is no way of defeating the enemy and most of the time is spent on less-important character arcs, and suddenly everything spins on a dime. It is done reasonably convincingly, but certainly the ending feels a little abrupt. However, the ending is also deliciously messy. Allies suddenly find themselves at odds and what seems like deliverance could be (and we don't find out for certain) enslavement under a different name.

Traitors' Gate (****) concludes an accomplished fantasy trilogy with intelligence and complexity. Elliott has crafted an interesting world here and it'll be interesting to see what happens there next. The novel is available now in the UK and USA.
Posted by Adam Whitehead at 09:42

Excellent review, Crown of Stars introduced me to Elliott and I really like it for the alternate medieval Europe but I found Crossroads and Jaran series more interesting in the end. Just curious though, why did you take a 5 year break between the books? And are you going to review the Jaran books anytime in the future? I am interested in what you think.

I got review copies of the first two books, and not of the third one, so it kind of fell by the wayside with all the other books that came through in the same time period.