Disney have announced that they will be releasing a new Star Wars movie every year from 2015 to 2019. Episode VII will be released in summer 2015, to be followed by Episode VIII and Episode IX in 2017 and 2019 respectively. Stand-alone films focusing on side-storylines or certain characters will be released in 2016 and 2018. There will also be additional side-films, but their release dates are uncertain at the moment. 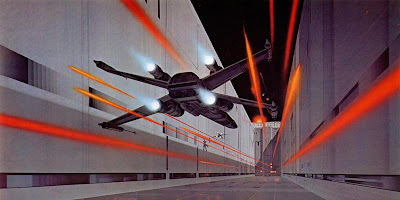 Whilst Disney's plans for Star Wars were known to be ambitious, the scale of the plans is somewhat surprising, not far off the aggressive release schedule for their Marvel universe movies. The announcement also seems to deny J.J. Abrams's suggestion that the first film could be delayed from 2015, since the pre-production window for the movie would be uncomfortably small (Abrams has only just started work on the project, and will likely not hit it full-time until Star Trek: Into Darkness is released in a few weeks, leaving only two and a bit years before release).

On the one hand, it'll be good to see new Star Wars material not written or directed by George Lucas on the screen. On the other, they risk oversaturating the audience with too many Star Wars movies. The Marvel universe films work with frequent releases because they mostly focus on completely different casts and the setting is - superheroes aside - contemporary. Unless they come up with something special here, Disney could be about to shoot the golden goose before it even lays the first egg.
Posted by Adam Whitehead at 08:11

I assume they're going to try and introduce a bunch of new potential characters to anchor sub-franchises around, and then do movie series on each of those characters.

I don't know if it will actually work out well, although I have no doubt that Star Wars 7 is going to make a ton of money whether or not it does because "Star Wars!". The worst case scenario would be for it to follow something like what happened with the Narnia and Terminator franchises, where they end up spending a ton of money on movies that under-perform, and then the whole thing ends up in production hell long enough that Star Wars goes dormant for a while.

Disney wants to make money, first and foremost. This can actually be to our advantage, though, because if something doesn't make money, they try to make it better. Example: Pirates of the Caribbean 3, while it made a ton of money, didn't make as much as the film before it in the franchise. So they took a few years off, then came back with the (in my opinion) superior On Stranger Tides, which, while still a mess, was far less of a mess and closer to keeping with the fun spirit of the original. The only reason I can think of for wanting to jump in so soon with STAR WARS is that Arndt, Kasdan, et. al. have brought up a bunch of great ideas.