Iain Banks only has months to live

In an official statement, Scottish author Iain Banks has confirmed that he has only months to live after it was discovered he'd had cancer for several years without being diagnosed. 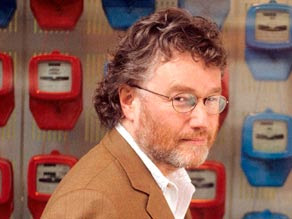 I am officially Very Poorly.

After a couple of surgical procedures, I am gradually recovering from jaundice caused by a blocked bile duct, but that – it turns out – is the least of my problems.

I first thought something might be wrong when I developed a sore back in late January, but put this down to the fact I’d started writing at the beginning of the month and so was crouched over a keyboard all day.  When it hadn’t gone away by mid February, I went to my GP, who spotted that I had jaundice.  Blood tests, an ultrasound scan and then a CT scan revealed the full extent of the grisly truth by the start of March.

I have cancer.  It started in my gall bladder, has infected both lobes of my liver and probably also my pancreas and some lymph nodes, plus one tumour is massed around a group of major blood vessels in the same volume, effectively ruling out any chance of surgery to remove the tumours either in the short or long term. The bottom line, now, I’m afraid, is that as a late stage gall bladder cancer patient, I’m expected to live for ‘several months’ and it’s extremely unlikely I’ll live beyond a year.  So it looks like my latest novel, The Quarry, will be my last.


Banks, 59, rose to prominence with the publication of his first, controversial novel, The Wasp Factory, in 1984. In 1987 he began publishing science fiction under the cunningly impenetrable moniker 'Iain M. Banks' (M stands for Menzies), and has, for most of his career, alternated SF and non-SF work (although several of his non-SF works have strong genre elements). In SF he is best-known for his nine Culture novels, a sequence of stand-alone novels set in an AI-run, utopian interstellar society often forced to resort to shady activities to keep it safe. Banks has twice won the BSFA Award and has been nominated for the Locus and Hugo Awards. His novel The Crow Road has been adapted as a BBC mini-series, whilst Complicity has been made into a film.

Banks has approached the news with his traditional gallows humour and put the best spin possible on it, but by any standards this is devastating news. Definitely one of the British lit scene's most interesting authors (in any genre).
Posted by Adam Whitehead at 14:50

I never read any of is novels but when it says someone (like, a real person) just has a month to live it hits you right in the stomach. I hope he makes the most of what time he has left.

Brings home I think the extent to which one of the greatest medical advances possible at the moment would be cheaper and more effective early cancer detection. So many people are only diagnosed when it is far too late. Effective and widespread early screening could save or considerably extend so many lives.

My father died from cancer of the gall bladder 5 years ago. It's a nasty one with a 95% mortality rate within 12 months of diagnosis (my father lasted 14 months).

Unlike cancers nearer to the surface (prostate, breast) early detection of cancer in internal organs is near on impossible.

Very sad news. I remember fondly reading Culture novel after Culture novel on my long train rides into and back from Uni in the early 90s.

I can't even think of what to say! I hope whatever time he has left is spent doing what he loves best, and with whom he loves best!

Wait, what?
This is not an April fool, is it?

That's a real shock. I was impressed with his joie de vivre when I saw him and Kim Stanley Robinson at the British Library last summer talking about utopian sci fi :/

Only ever managed half of Consider Phelbas, seemed a bit light on story but heavy on ideas. A real shame :(