Well, as good as. 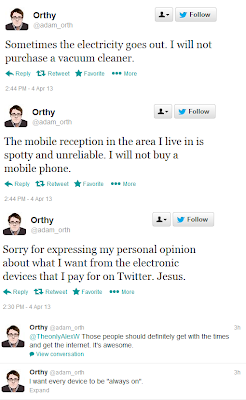 Adam Orth is a creative director at Microsoft Studios and a fairly influential voice within the company. Strong rumours have been circulated for a while that Durango - the codename for the next X-Box - will require an always-on Internet connection, in contrast to its rival, the PlayStation 4, which will not. Gamers have been grumbling about this, with many diehard X-Box fans saying they will switch to PlayStation for the next generation if the next X-Box is online only.

Orth took to Twitter to criticise people for not having an always-on connection, stating that they "should definitely get with the times and get the Internet. It's awesome." When Manveer Heir, a senior designer at BioWare, pointed out that some people live in rural areas with spotty or no Internet connections, Orth expressed bewilderment than anyone would want to live in such areas. Other issues, such as many Internet companies imposing crippling bandwidth restrictions on users which would prevent them downloading entire games or even playing multiplayer on their consoles, were not discussed.

Orth has been thoroughly condemned for his remarks, though Microsoft's reaction was bizarre. Aaron Greenberg, a chief of staff at Microsoft well-known for his accessibility via Twitter, even said he didn't know who Orth was (which in a company as large as Microsoft is actually possible, but he should have perhaps resorted to a five-second Google search before replying). Heir later took to Twitter explaining that Orth is "a good guy," and that his remarks have been overreacted to, though by this time the damage was done.

Always-online requirements remain controversial almost a decade after the first games appeared that required them. Internet infrastructure - especially in rural areas where millions of gamers still live - is simply not up to the job of managing always-online requirements and even where it is, companies still impose cripplingly low bandwidth restrictions. Dismissing a large swathe of customers in this manner is simply going to push them onto the PlayStation 4. With the dwindling number of Microsoft exclusives (they are pretty much left just with the Halo series and not much more), the reasons for buying the next X-Box over the PS4 are likewise becoming non-existent. Unless the next X-Box is comprehensively more powerful - or substantially cheaper - than the PS4, it looks like Sony might have the next gen in the bag already.

Indeed, there were a lot of happy faces at Sony this morning, as this tweet from Sony CEO Kaz Hirai indicates:

UPDATE: Bah, the Sony CEO Twitter reply was from a parody account. Still funny though.
Posted by Adam Whitehead at 10:07

I honestly can't tell but I hope you realize that's a joke account. I'm assuming you do but others might not.

Check this video out! Francis is slightly upset after hearing the news about XBox.

You know, as much as it would annoy me if the next X-Box is an online only thing (I don't necessarily want my gaming devices to show the rest of the world my stats, what I'm playing, etc), but so long as Microsoft doesn't do the same ridiculous thing as last time and make people pay an extra $50+ for the online adapter when other comparible devices are offering the same service built-in, it may not be so bad.