A Caribbean politician becomes the ruler - 'El Presidente' - of the small country of Tropico, scattered across several islands. He must guide his nation to peace and prosperity, evading rebel coups and placating the feuding superpowers along the way. 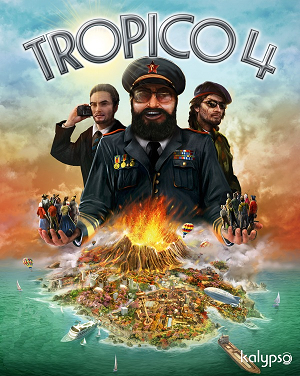 Tropico 4 is a city-building simulator, belonging to the same genre as the SimCity series. The twist of this game is that the setting is the Caribbean and the emphasis is on building relatively small cities based around industry and tourism, with the player also having to balance the needs of both the people, foreign powers and a number of internal factions to achieve success.

Whilst there are various scenario and sandbox modes, the core of the game is the campaign. This is a story-driven narrative that unfolds across 20 scenarios (although, rather lazily, there are only 10 maps: each map is used twice, but in most cases is supposed to be a different island) and acts as an extended tutorial: the very brief actual tutorial isn't much help, but the missions expand on the concepts from the tutorials quite nicely. In most cases, the game unfolds the same way: you start off with a palace and several other buildings and have to build up both your population (by allowing large-scale immigration and building homes for the newcomers) and your sources of revenue (by building mines, plantations, farms and tourist facilities). However, you also have to keep the population happy by building healthcare, religious, entertainment and education facilities, and you also have to keep the various factions happy. The capitalists will be satisfied if you build mines across the entire island, but the resulting pollution will annoy the environmentalists. Immigration will anger the nationalists, but the lack of free healthcare and housing will irritate the communists. Unhappy citizens will become rebels, requiring you to build up a military force to deal with them, which means diverting funds away from the economy. And so on.

As a city-builder, Tropico 4 is very entertaining. Building networks of roads and slamming down buildings like an overgrown Lego set is satisfying, and the game's impressive 3D engine allows you to zoom down to street corners and see what individual citizens are up to. A comprehensive almanac reports back on how happy the citizens, factions and foreign powers are and offers suggestions on how to improve weaker areas. Most of the scenarios will be completed before your cities get too large, but on a few occasions I ended up with substantial metropolises incorporating huge residential areas, large industrial zones, a thriving tourist sector and entertainment-focused downtown areas. When everything goes to plan, it's a very satisfying experience. 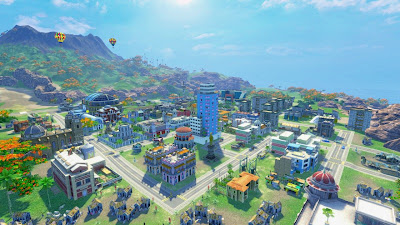 The game does have its issues. As with all of these sort of games, it won't be long before you work out an optimum early-game build-order which gets you a lot of cash in short order, which makes the rest of the mission trivially easy. The campaign, complete with scripted and often-unpredictable events, is good at throwing you curveballs you have to deal with on the fly, ranging from out-of-control UN inspectors imposing arbitrary restrictions on your economy and industry to rogue Russian nuclear missiles threatening to hit the island. Another problem is that there is often a substantial lag - sometimes 3-5 years of in-game time, maybe half an hour of real playing - between you doing something and the results starting to trickle in (most notable when it comes to building new agricultural projects). Most annoying is that the game is centred around the road network and particularly whether there's enough garages for everyone to park their cars (without garages your population will be reduced to walking everywhere, which is hideously inefficient). You'll end up with garages on every corner and at every single out-of-town facility on the island, and a road network covering almost every open surface area to reduce the hideous traffic bottlenecks that slow down your economic development.

Once you get used to the game's eccentricities, it doesn't take long to realise there isn't a massive amount of depth here. There's dozens of buildings, numerous factions and foreign powers to appease, but it's all on a fairly broad base lacking more interesting subtleties or complexities. Once you understand the game's systems, it's fairly easy to get every faction behind you, avoid rebellions and make absolute bucketloads of money. The sheer depth and replayability of something like SimCity 4 is missing. Tropico 4 is certainly much more approachable and easy to play than some of the more hardcore city builders, and may make a viable step-up for someone used to playing CityVille who wants to tackle something more interesting, but ultimately the game runs out of steam before the campaign itself is completed, although the last couple of missions do reignite some interest with more original plot twists.

It's also worth noting that Tropico 4 is a refinement and expansion of Tropico 3 rather than a radically different game. Newcomers to the series are certainly advised to start with Tropico 4, which has a more refined interface, a more compelling (and useful) campaign and (slightly) better graphics, but those who have already played the third game may not find a lot more here than in the existing title.

Tropico 4 (***½) is a fun city simulator. It's enjoyable, has an amusing (if occasionally close-to-the-knuckle stereotyping) sense of humour and is far less obtuse than some similar games. However, it also lacks a huge amount of depth and is unlikely to have people continuously returning to it for years to come. Recommended, especially on budget. The game is available now (bundled with the Modern Times expansion, which is pretty much more of the same) in the UK (X-Box 360, PC) and USA (X-Box 360, PC).
Posted by Adam Whitehead at 15:20