Superb UK vampire series ULTRAVIOLET to be re-released on DVD

Ultraviolet, probably the finest vampire-based TV series of all time, is to be re-released on DVD next Monday. 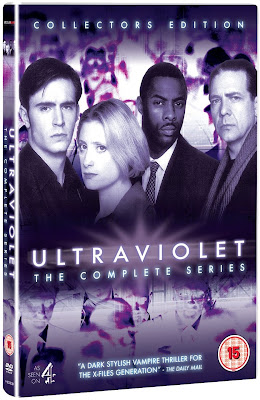 The six-part series originally aired in 1998. It stars Jack Davenport (Pirates of the Carribean, This Life, Coupling) and Idris Elba (The Wire, Luther), with a very young Stephen Moyer (True Blood) providing able support. Susannah Harker and Philip Quast round off the recurring cast. The premise is that vampires (never called that in the series, only 'leeches' or 'Code 5s') are real and a secret government organisation - part-funded by the Vatican - is fighting them. The tone is serious and grim, with an emphasis on the scientific ramifications of the existence of vampires. It's also extremely well-written (by BAFTA-nominated UK writer-director Joe Ahearne, who later worked on Doctor Who) and superbly acted, with a nice twist in the final episode.

This edition features a new documentary about the series. However, disappointingly, it is only being released on DVD, as the series has not yet been remastered for Blu-Ray. At the moment it appears to be a UK-only release, although the previous edition is still available in the USA.
Posted by Adam Whitehead at 08:56

Email ThisBlogThis!Share to TwitterShare to FacebookShare to Pinterest
Labels: ultraviolet

Great news! That was one of my favourite series. Shame they never went to a second series but never mind.

Trivia I recently came across - Susannah Harker used to be the partner of Iain Glen (Ser Jorah). She reads the audiobook of Hugh Howey's fab post-apocalyptic "Wool" and she does a great job - it's highly recommended.

Good news, this was really good. I watched it when the Milla Jovovich film was released (it was supossedly based on the series). I recall buying a 2-disc DVD copy with extras from "Kult TV".

The Mila Jovovich film had nothing to do with it apart from the name. Unfortunately, because 'Ultraviolet' is a generic, pre-existing name, it can't be copyrighted.

Great series, the original had extras of its time "PC Screensaver" & "Weblinks". Strange they re-did these but didn't go for the bluray.

Oh wow, I remember watching a couple of episodes of this when I found the DVD set at the movie store I used to work for. Unfortunately I never got to watch more than those first couple of episodes, because the disc was scratched beyond repair. I liked what I saw, though, so if the rereleases makes it to these shores, I'll be picking myself up a copy!