The Tyrant's Law by Daniel Abraham

The armies of Antea have conquered Asterilhold, but Geder Palliako, the Regent, allows his troops no time for rest. His plans, and those of the cult of the spider goddess, have taken on a note of urgency as they try to unearth the conspiracy that resulted in the death of the last King of Antea. In Camnipol, the disgraced wife of the traitor Dawson is working to both reestablish herself and her household and to bring about Geder's downfall. In the wilderness of the southern jungles, Marcus Wester and the renegade spider priest Kit are searching for a powerful weapon to use against the cult. And in the city of Suddapal Cithrin is apprenticed to an experienced banker to complete her training. But as the armies of Antea advance, Cithrin discovers that making money may be less important than finding a good cause on which to spend it. 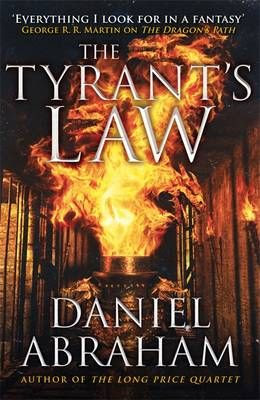 The Tyrant's Law is the third volume in the five-volume The Dagger and the Coin, bringing this series past its halfway point. Those who've read The Dragon's Path and The King's Blood will know what to expect: well-crafted characters in an interesting (if not overtly original) world taking part in a plot inspired by a mixture of Babylon 5, Firefly and the real-life history of the Medicis. Like many such epic fantasy series with a number of entwining plots and character arcs, the series risks getting more diffuse the further it goes on, but Abraham prevents sprawl by maintaining a tight grip on a small number of POV characters: the entire plot unfolds from the POVs of Cithrin, Marcus, Clara (Dawson's widow) and Geder alone. This keeps the pace brisk and the word-count low, though not the page-count; due to a questionable decision to print the book in a font so large I briefly thought it was the edition for the hard of seeing, the book is exactly 500 pages in length, which seems rather unnecessary.

Still, The Tyrant's Law is a very good fantasy novel. Abraham has always been more interested in the nuances of characters than in massive battles and magical fireworks, and his most enviable skill is developing characters concisely and establishing convincing depths within them. So whilst we have no new POV characters, all of the returning faces get new dimensions added to them and more development into fully-rounded individuals. Geder becomes more accomplished in the arts of political intrigue, Clara becomes a convincing intriguer and Cithrin, already a skilled financier, learns some things about family and responsibility. Though not POV characters, both Yardem and Kit also develop in intriguing ways. Abraham undercuts some traditional epic fantasy tropes as well, such as turning a Conan-esque raid on a temple into a moment of profound character and spiritual revelation.

In some areas The Tyrant's Law is a bit of a let-down on The King's Blood. There's a lot of wandering around the countryside and at two separate times the same characters head into the wilderness to find a secret magical MacGuffin, giving rise to a feeling of repetition (though again Abraham subverts expectations with a surprisingly epic flashback ending). Cithrin being reluctantly apprenticed to yet another Medean bank executive (albeit a rather different character) and learning valuable life lessons also feels a bit over-familiar. The Tyrant's Law is a middle volume and showing some of the weaknesses of that position, but overcomes most of them through some solid plotting and decent characterisation.

If there is one major criticism that can be made of the series, it's that Abraham has deliberately set out to write something more traditional after the relative commercial disappointment of his debut sequence, the lyrical and imaginative Long Price Quartet. As a result, whilst Long Price felt like it was written from the heart, Dagger and the Coin sometimes feels a little too artificially-constructed and a little too knowing in its references. This isn't a major problem, but it does make one feel that this series is going to end up in the 'enjoyably good series' pile rather than the 'modern fantasy classics', where Long Price firmly resides. Still, with two more books to go, Abraham still has time to elevate the series to a new level.

Email ThisBlogThis!Share to TwitterShare to FacebookShare to Pinterest
Labels: daniel abraham, the dagger and the coin, the tyrant's law

Was this always planned to be a 5-book series?? I've read the first two books and thought it was going to be a trilogy and that this would be the last book lol

Yes it was always planned to be a 5 book series. 4th book will be The Widow's House.

Heh, this reminds me that I still need to read the second book. I really enjoyed the first one, and it's good to hear that the series stays good up to this point.

King's Blood was an amazing second installment. Abraham, I think, deserves much more credit for this series than he is getting. it is subtle, smart, moving, and kept well in hand. I have no doubt that by series' end The Dagger and Coin will go down as one of the greats. Here's hoping book 3 keeps the momentum building.

I have to agree with Jordan. While I suppose it's more "European" seeming and conventional that way, the banking emphasis, and the villain protagonist, make the series atypical. And IMHO, the fact the story is always moving forward, tightly wound, and motivated by believable character choices throughout, makes it one of the best Epic Fantasies today.