The movie The World's End has had its release date brought forwards by a full month. The film will now be released on 19 July in the UK this year (the US release date of 23 August remains - so far- unchanged). 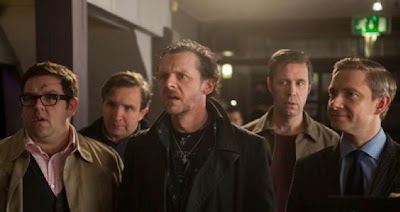 The World's End is the third and concluding film in Simon Pegg and Edgar Wright's thematic Three Flavours of Cornetto trilogy, following on from Shaun of the Dead and Hot Fuzz (Paul, though also starring Pegg and Nick Frost, was created by a different team), as well as their TV show Spaced. As well as starring Pegg and Frost and being directed by Wright, some other actors from the earlier projects are reappearing: Paddy Considine (one of the Andys from Hot Fuzz), David Bradley (the incomprehensible farmer from Hot Fuzz) and Mark Heap (tortured artist Brian from Spaced) will also have roles in the new film. Apart from Pegg and Frost, the only actors to appear in all three films are Martin Freeman, though he will have a larger role than his two brief appearances in the prior movies, and Rafe Spall (who also appeared in Spaced).

The film's premise is that a bunch of friends go out on the town in London to recreate an epic pub crawl from their youth, only to get caught up in the disaster to end all disasters.

The World's End has done a straight swap with Kick-Ass 2, which is now being released on 23 August in the UK (and 16 August in the USA).
Posted by Adam Whitehead at 18:27

The World's End pub was literally my local back in the eighties, but I would see this anyway